For those who speak The Queen's English, this post refers to the Egyptian-style mummy, not the woman who birthed you.  I just thought I'd get that out of the way to avoid confusion and to prevent you from thinking this post is about my mother.  She's just fine, by the way.

This particular patient is from my training, though there are some patients and some conditions I've seen that are so bizarre it feels like it was yesterday.  I'll warn you - if you don't like gory stories, turn back now.
YOU'VE BEEN WARNED.

I was asked to see a patient with "active arterial bleeding" in the trauma bay.  This usually indicates a stabbing or a shooting, but in this case...not so much.  Well, actually it was a stabbing.  Sort of.  I walked up to the patient who smelled vaguely of a landfill, and I immediately noticed his right wrist bandaged tightly.  I asked the nurse what the problem was, and with a crooked smile he said simply, "Take the dressing down.  You'll see".

When I took off the gauze, what greeted me was a mummified hand that looked sort of like this: 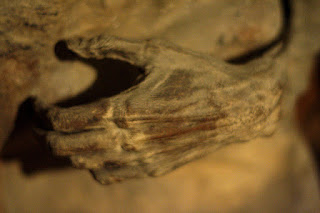 ...except that it was attached to a very much alive-appearing arm.  And yes, it was actively spurting blood.  I quickly applied a pressure dressing and asked the patient what the hell was going on.  My father always taught me "Don't ask a question that you don't want to know the answer to."  Well, I was not quite prepared for this particular answer.

It turns out the guy was a heroin addict, and he had run out of veins to inject several months prior.  So in his desperation, he began shooting into his radial artery (the "pulse" in your wrist).  That site quickly got infected, so he tried to dig the infection out (his words) with...an ice pick.  A dirty ice pick.  Where the hell do you even get an ice pick these days?  Well, that obviously didn't work so well, and after a while, the hand lost its blood supply and died.  And all the while he continued shooting into the artery.  And now that artery was shooting blood up to the ceiling.