My hands have done some pretty amazing things - they've held my newborn children, built furniture, cured diseases, and even saved a few lives. But no matter how much I want them to be, they are just not magical. I can not use them directly to cure pain, a fact that many ER docs fail to grasp.

I received a call from the ER earlier asking me to see a patient with abdominal pain. This is the most frequent call I get, so that didn't make it unusual. This could be appendicitis, gall stones, a bowel obstruction, pancreatitis, diverticulitis...or the dreaded "other". The ER doc explained that this patient had been to the ER numerous time recently with the same vague generalised abdominal pain. Her blood work today was all completely normal, an ultrasound of the abdomen was normal, and a CT scan of the abdomen was also normal.

"I can't find anything wrong with her, but I'm just wondering if you can lay hands on her before I discharge her."

Let me get this straight - you want me to confirm, with my bare hands, what the blood work, ultrasound, and CT scan have already shown you...that there is nothing wrong with her that a surgeon can fix?

Am I supposed to have the power to touch the patient and magically make her pain disappear? Instead of yelling at the ER doc (which was my first inclination), I went to see the patient. I indeed touched her abdomen, and after talking with her for 2 minutes, I confirmed that she had eaten some bad sushi.

I'm sorry, but not all pain is surgically correctable. There are some things I just CAN'T fix.

"The only stupid question is the one unasked." - DocBastard


Ok, I have to admit I didn't actually say that first, and despite exhaustive research (i.e. a 10 second Google search), I have been woefully unable to figure out who did say that first.  However, after thinking about it for a while, I realised that I am damned glad I didn't say it, because it's entirely untrue.  There are plenty of stupid questions that actually get asked.  I get asked these stupid questions all the time - mostly by patients, but also by their families, nurses, and even other doctors.

I get this one all the time: "Is my leg broken or fractured?"  Uh...what?  I wasn't aware there was a difference.  I must have missed that day in Bones 101.  If your bone isn't in one piece, it is broken.  Full stop.  If you're asking if you need surgery to fix it, well that's a different question.

One thing that car accident victims love to ask is, "How can I get my wallet/purse/money/gun from my car?"  They also love asking the details of the accident.  Sorry genius, but I wasn't there.  I can't begin to guess how your car ended up in a ditch, and I haven't the foggiest idea who has your cell phone.

"When is Dr. Consultant going to be here to see me today?"  I love this one.  I work with dozens of doctors at several hospitals, and I can personally guarantee you that I don't know the daily schedule of a single one of them.

I guess that idiom needs to be changed.  I'll propose this alternative: The only stupid question is the one you ask without using your brain first.

EDIT: I will confess that I deleted two questions from my post that, after reading a few comments, I decided aren't stupid at all.  Rather, they just put us in an impossible position to answer.  "How long will I live" and "How long will I be in the hospital" are very difficult to answer, but very understandable to ask.  I'm guilty of some stupidity sometimes too, and I apologise if I upset anyone too much.
at June 26, 2012 13 comments:

I'm just as guilty as everyone else of losing perspective.  My life seems very difficult sometimes - running around to multiple hospitals trying to take care of people, two small active children who drive me crazy, mortgage payments, car payments, malpractice insurance premiums, sick patients...it's enough to make me crazy.  Sometimes I get the feeling that I'm juggling chainsaws, and at any time one of them may fall and cut my arm off, and I'd need the services of a trauma surgeon...if only I could find one.

But just when it seems like my life is rough, I run into a gentleman at one of my hospitals who happens to be on the janitorial staff.  He's probably in his 40s or 50's, quite tall, very perky, and always happy.  His job is collecting hazardous trash from various parts of the hospital, depositing it into large carts, and then transporting it to the larger bins outside.  And yet in the 4 years I've known him, I've never once seen him in a bad mood.  He always greets me with a huge smile and a "Hey Doc, how are things with you today?  I'm doing just great!"

Think about that - this man's job is carting hospital waste, and he's ALWAYS HAPPY and always ready to cheer me up.

It's people like this man who really give me a new outlook on things.  If someone who works with trash can be happy all the time, why can't I?  When I'm feeling most frustrated, I think about that, and him, and it makes me smile.
at June 20, 2012 4 comments:

Intelligence is all relative. I'm pretty darn smart, but compared to Stephen Hawking, I'm a doofus at best. What ought to be common sense to me seems to come very slowly to others. As long as it comes eventually, then not all is lost.

My last shift consisted of 15 patients in 24 hours, all of them blunt trauma victims (as opposed to the more glamourous penetrating victims - gunshots, stabbings, impalings, etc). When the weather is nice, the motorcycles come out, and that day was particularly warm and sunny. One of the patients was a 46 year old motorcyclist who hit a patch of gravel and lost control of his bike. He slid on the ground for 10-20 meters until he finally came to a stop in the middle of the road, lucky that he wasn't run over by a car. Fortunately nothing was seriously injured except for extensive road rash on his chest, back, arms, and legs. That was the one day, coincidentally, that he wasn't wearing his leather jacket, or so he claimed. "I swear, I ALWAYS wear my seatbelt. I just forgot today!" Uh huh. Sure.

Unfortunately he had just finished recovering from back surgery, and this was going to set him back several months. He knew it, too. I was giving him instructions on how to care for his road rash, including daily cleansings with soap and water.

"Why, so when it hurts like hell I can remind myself what a dumbass I am?"

I just looked at him with a hopeful expression. "Yeah, I'm giving up the bike. It was stupid. The whole thing was stupid."

Giving up the motorcycle is smart. But realising how dangerous they are BEFORE you tear up 10% of your skin is even smarter. Smart is all relative.
at June 12, 2012 6 comments:

I know all of you readers are just clamoring for an update to this story, where the young man's mother refused to wear her seatbelt.  Fortunately after a few days, we were able to remove his breathing tube and he woke up.  He was eventually able to eat and walk, and I discharged him to a rehabilitation hospital late last week.  His brain is mostly functioning normally, though he does have violent outbursts frequently.  He should make a full recovery. 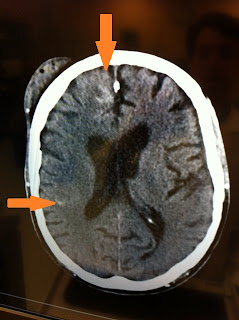 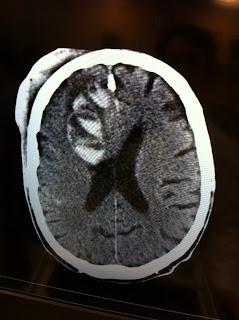 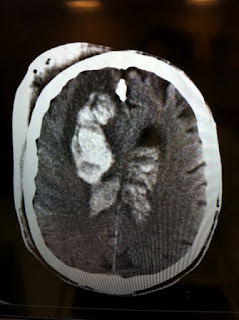 Cases like this remind me to tell my wife and children I love them at every opportunity, because you just never know what will happen 5 minutes from now.  If you have people you love, go make sure they know it.
at June 05, 2012 4 comments: