If you're expecting a stupid patient story today, you're out of luck.  I haven't told very many nice stories with happy endings, but after the miserable night on call I had last night, I think I need to cheer myself up.  If you don't like that...well, tough.

Domestic disputes piss me off.  They are usually one-sided, and the weaker person loses.  Unfortunately that's usually the woman.  Such is the case with this next patient, a very nice 30ish year old woman whose husband got mad at her.  Now I get into arguments with my wife, but they usually end up with me apologising, and then one of us makes a joke, and that's the end of it.  This guy, on the other hand, thought he'd settle the argument with a hammer upside his wife's head.  I'm not exaggerating.  He hit her in the head with a hammer.  You don't believe me?  Well look for yourself, non-believer: 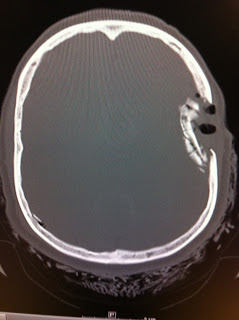 She was taken immediately to the operating theatre to elevate that depressed portion of her skull and then to reconstruct it.  We kept her sedated for several days to allow the swelling and pressure inside her head to improve.

Amazingly, she started waking up about 2 weeks later.  That's great, right?  Unfortunately for her, that area  of the brain just under the injury on the left side of her head (right side of the picture...just use your imagination) is responsible for the production of speech (it's called "Broca's area").   She could understand exactly what we were saying and she wanted to talk back to us, but her injured brain didn't allow her to.  However, by the time I discharged her from the hospital about a month after the attack, she was able to get a few words out.

"THAT SUCKS, DOC!  SHE CAN BARELY TALK??" I hear you screaming.  Oh pipe down, you.  She walked into my office about a month later and was perfectly normal.  Her voice was normal and she could articulate perfectly.  She was  EXACTLY as she was before the attack...except for the titanium plates in her head and no ring on her finger.
at January 26, 2012