WARNING: DO NOT READ THIS AT WORK OR NEAR ANYONE WHOSE OPINION OF YOU MATTERS

People talk too much.  I've often said that a closed mouth gathers no feet, but no one seems to listen, probably because they're too busy flapping their gums.  Despite the fact that everyone on the planet seemingly talks nonstop (my children included, unfortunately), some truly great notable quotes have managed to avoid getting buried by the mundane and banal:

To find yourself, think for yourself. - Socrates

I will not let anyone walk through my mind with their dirty feet. - Mahatma Gandhi

This above all else: to thine own self be true. - William Shakespeare

As you can see there have been some pretty goddamned great quotes over the course of human history.  But as with everything, there are two sides of the story.  As great as those quotes are, some others have said some really fucking stupid things:

Sorry losers and haters, but my I.Q. is one of the highest -and you all know it! Please don't feel so stupid or insecure,it's not your fault
— Donald J. Trump (@realDonaldTrump) May 9, 2013

If Everybody In The World Dropped Out Of School We Would Have A Much More Intelligent Society.
— Jaden Smith (@officialjaden) September 13, 2013

Yes . . . they actually wrote that.  Fucking imbeciles.  To be fair, if you were to put a microphone on Trump at any time of day, you'd probably get many more quotes that would fit quite nicely on any Stupidest Quotes list.

Anyway, sadly none of the really good quotes have been either A) said by me or B) directed to me.  And since this egotistical little blog is all about me, I thought I'd share probably the greatest thing anyone has ever said to me.

Anyone who knows anything about this stupid little blog knows that my favourite thing in the world is the RFO.  In case you aren't clear on what an RFO is, you can read more about them here, here, or here.  I may make it seem like RFOs are very common, but sadly they are not.

Hmm . . . reading back that last paragraph, I make rectal foreign objects sound incredibly creepy, even creepier than they actually are.  Let me explain so I don't sound quite so creepy.  The reason I like removing them so much is because it is usually a very simple procedure, and it is a remarkably satisfying experience.

Hmmmm . . . that explanation didn't really seem to help things at all.  Damn.

Ok fine, you want the truth?  You really want the truth?  You think you can handle the truth?  FINE!  Yes, I enjoy taking things out of people's asses.  There, I said it!  Are you happy now?  I enjoy it, and if that makes me a disgusting human being, then so be it.  But before you turn away to vomit, consider this: It takes only a few minutes, patients feel better immediately, they often require little-to-no anaesthesia, and they usually are able to go right back home.  How many other surgical procedures are able to make that claim?  Very few.

Did that help at all?  Still no?  Well damn.

Anyway, back to the story.

The call from the emergency physician came in just before midnight (of course), and it was the same as all the others:

I may have sounded a tad too excited, because when I arrived a few minutes later, Doctor Emergency looked startled, like she was about to call a psychiatrist on me.  Apparently I need to learn to tone down my excitement a bit.

A quick glance at the patient's X-ray told me two things: 1) There was no evidence of perforation (good), and 2) whatever "it" was was not metallic (also good - that usually makes it easier to grab).

I walked into the room and introduced myself to Antonio (not his real name™), who seemed entirely plussed.  That was fairly extraordinary - I was expecting him to be at least a little nonplussed.  Regardless, I decided not to beat around the bush and got straight to the point:

Uh . . . well that was unexpected.  I felt somewhat stupid because I had no idea that there was a difference, so I asked him.

After absorbing that information (and silently wondering if I will ever have occasion to use it again), I asked him how long it had been stuck.  Six hours, was his answer.  SIX FUCKING HOURS.  He had apparently been trying (and failing) to remove it for quite some time before giving up and resigning himself to the fact that he would need to seek professional help.

And that's where I stepped in.

After a bit of light sedation, Antonio lay down on his side.  I inserted the clamp into his rectum along my finger, felt for the flange, and grabbed it (making sure not to catch any rectal tissue).

After about 10 seconds of grunting, pushing, pulling, screaming, and prayer, out popped this: 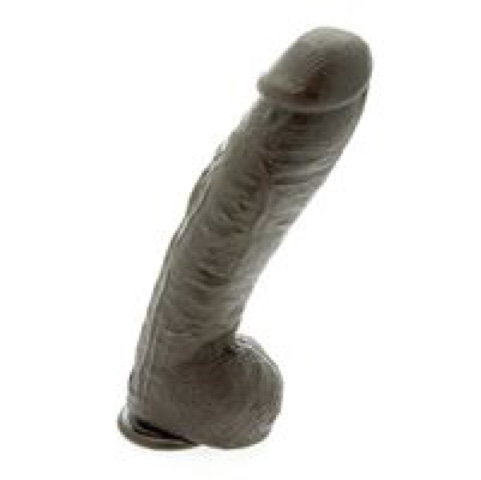 Most of the time all that grunting and pushing results in a baby.  No such luck for Antonio.

Though I figured I knew the answer to my obvious question already, I decided to ask it anyway.  Do want your dong?  And that's when Antonio hit me with the greatest thing anyone has ever said to me:

In my entire medical career I've rarely had to suppress a laugh as much as I did at that precise moment.  But suppress it I did.  At least for a few minutes until I got back to my car.

And then the hilarity of imagining Antonio giving his wife her dong back, trying to explain where he had been, and where it had been, fell over me.