It's been nearly 4 years since I started this blog, and with every new post I find it harder and harder to find material that isn't boring, repetitive, or both.  I'd like to write about homeopathy, seatbelts, antivaccinationists, or smoking every week, but I suspect I would lose and/or bore everyone to tears by doing so.  Instead, I wait for the truly good stories, ones that I find inspiring or unusual. Barring that, I sometimes take more mundane subjects and try to spin them in an interesting way.

And sometimes the stories just write themselves.

I ordinarily hate phone calls from emergency physicians at midnight.  Rarely do I answer the phone and hang up with a smile.  By now you've probably guessed that's exactly what happened recently.  You'll find out why I was smiling momentarily, I promise. And I guarantee you'll end up smiling too.  And maybe even laughing your ass off.  Or maybe scowling.  Possibly vomiting.  Whatever.

Dr. Elise (not her real name™), a lovely and strangely competent emergency physician, had a rather strange lilt to her voice when I picked up the phone.  I immediately suspected by the tone of her voice what was coming, and boy was I ever right.  I like being right.

Smiling yet?  Because you know damned well a picture is coming.  I hadn't had a rectal foreign object in quite some time.  If you're wondering why I was so excited, you're not alone, because Dr. Elise and two of her colleagues asked me the exact same question.  Why do I get so damned giddy at rectal foreign objects?  Do I have some strange fetish?  Do I enjoy the schadenfreude?  Am I just a sick, perverted bastard?  No, I told her, the answer is much  more mundane than that: removing RFOs is very, very satisfying.

Anyway, I got to the hospital a few minutes later, and I did my best to suppress my giddiness as I walked in.  I have no idea what most people would think of a surgeon with a stupid grin on his face as he walks into the hospital, but I suspect it would be nothing good.  Probably some serial chainsaw killer shit.  I went straight to the radiology computer and pulled up his X-ray: 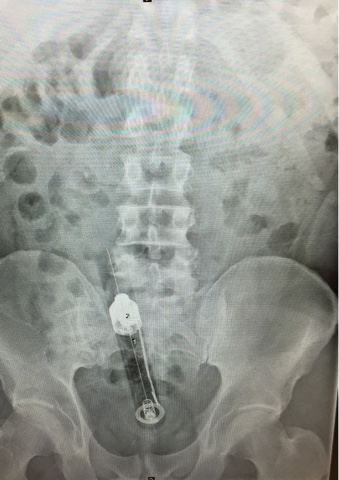 On the X-ray it looked awfully high in his rectum (yes his), so I went to get a pair of ring forceps that I suspected I would need.  I then went in to his room to introduce myself.  He looked terribly uncomfortable sitting there next to his wife.  Obviously.

They both glanced at each other, looked at the floor, and whispered, in unison, "No."

He pushed.  I pulled.

It was a very satisfying *plop*, which reinforced why I like these cases so much.  I then held up their lost toy and asked them both if they wanted it back.  They both wordlessly shook their heads vigorously, so I threw it straight in the bin, accepted their heartfelt thanks, said goodbye, and walked out.

No embellishment needed this time.  None at all.
at September 14, 2015