What do all of these things have in common?  1) They were all designed to save your life in an emergency, 2) They were all added to the safety arsenal as an afterthought when someone realised they were necessary, 3) They work when used properly.

I understand that last one may seem obvious, but stay with me here.  I'm going somewhere with this.

Pneumatic nail guns are wonderful inventions that make construction jobs infinitely easier (not to mention a hell of a lot of fun).

Wait wait wait, nail guns?  What the hell are you on about, Doc?

Yeah, you didn't see that coming, did you?  You thought this was going to be another seat belt or motorcycle story, didn't you?  Listen, I told you to stay with me.  Just think for a second - trauma, nail guns, safety . . . you better believe a good picture is coming.  So be patient.  Or just skip to the end if you want to act like an impatient child.

As I was saying, banging nails with a regular hammer all day runs the risk of repetitive stress injuries, not to mention smashing your thumb (we've all been there) and cursing in front of children who just want to "help" you build them a bird house.  Nail guns eliminate those risks, but they introduce new, even riskier risks, namely firing a sharp weapon somewhere into your body.

To counter that risk, every nail gun (except the ones that fire tiny nearly-harmless pin nails) has a safety mechanism built in to the nose so that the gun must be pressed against a hard surface with relatively significant force for it to fire.  If you're wondering how I know this, I own five of them, including a framing nailer, an angled finish nailer, a straight finish nailer, a stapler, and a pin nailer.  I love my tools.

Joe (not his real name™) was one of those people who didn't seem to think the safety mechanism on his nail gun mattered.  He was completing a frame on a house using a large framing nailer when there was an . . . incident.  An accident.  Well, something happened.  I can't say exactly what that "something" was, because Joe wouldn't tell me.  I'm not sure if it was because he was too embarrassed or because he was screaming in pain.
When he was rolled in, he was fully dressed and clearly in agony.  Most patients who come my way are at least partially disrobed so the medics can assess the extent of their injuries.  Not Joe.  The medics mentioned that because of an "apparent leg injury" they tried to remove his pants, but they wouldn't come off.  And every time they pulled, Joe yelped even louder.
As he was lying there on the stretcher, his leg looked fine.  No blood, no weird angulation from a bad fracture.  But when he rolled to the side so we could see the back of his leg, the problem suddenly became glaringly obvious.
If you're wondering why he was screaming, maybe this X-ray of his knee will satisfy your curiosity: 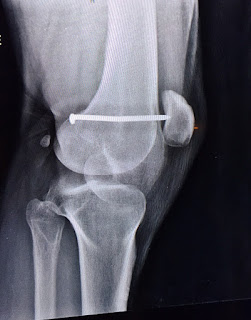 If you can't tell, that's a 9cm (3.5 inch) clipped-head framing nail that went into the back of his knee, through his femur, and into his patella (kneecap).  It was embedded so deeply and so thoroughly into the bone that the head of the nail had dragged the fabric of his pants at least 1 cm under the surface of his skin, pinning his pants to his leg quite effectively.
Yes indeed, he had used one of these: 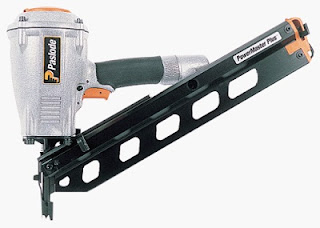 to fire one of these: 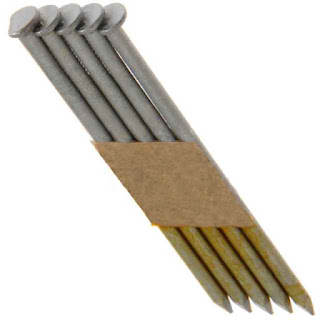 into the back of his knee.  Just to give you an idea of how big these framing nailers are, well, a picture is worth a thousand words: 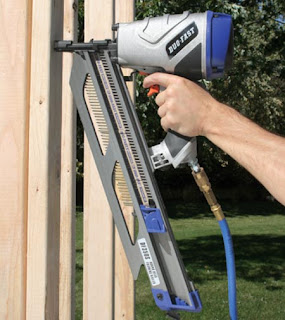 They are HUGE.  And notice the nose of the gun being pressed into the wood?  That's the safety mechanism that all these guns have.  Well, almost all of them.  That nose didn't exist on Joe's gun, because he had removed it.
No, I did not ask him why.

I still have no idea how he shot himself in the back of the knee, and he repeatedly insisted that there was no one around him and that he did this to himself by accident.  Regardless, the orthopaedic surgeon took him to the operating theatre and had to use various metallic instruments of death and destruction to remove the nail from his femur and patella.  A few days later, Joe walked out of the hospital, still insisting that he did this himself.  Somehow.

So now think back to all the safety mechanisms I mentioned at the beginning.  What else do those things have in common?  They only work IF YOU USE THEM.
at September 27, 2015