Sense. This story makes none. 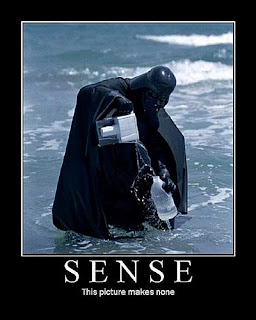 If you've been here for a while, you know by now that some of my stories make little sense until the big reveal at the end (at least that's how it seems in my ego-inflated head).  You know, something like an M. Night Shyamalan movie . . . before they started to suck.  Now don't misunderstand me, I don't mean to say I think my stories are as good as the Sixth Sense in any way.  I'd never be that arrogant.  Maybe as good as Unbreakable, though.  Yeah.  But not The Happening.  God no.  And definitely not The Village or Lady in the Water.  Those two steaming piles of horse shit represent several hours of my life I'll never get back.  Those 4 hours would have been better spent waxing my back or learning to juggle chain saws.

Anyway, this isn't one of those stories.  Like all of M. Night's recent movies, this one makes no sense at the beginning, fails to improve by the middle, and by the end there is just no good resolution at all.

Make sense?  No?  Good.  Kind of makes you want to stick around to read it, just to watch the impending train wreck, right?  Hello?  Are you still there?

For the two or three die-hard masochists who still remain (likely just my parents . . . they'll read anything I write no matter how bad it is), I'll do my best not to bore you.  Much.

Just as I was sitting down to eat my very appealing-looking Frozen Vending Machine Hamburger© (I swear I saw something similarly appetising in Shaun Of The Dead), my pager alerted me that an assault had just arrived in the trauma bay.  Wait no, not an assault, but two assaults.
My "meal" would have to wait.
Walk-ins are not terribly uncommon, but two arriving simultaneously is, and it usually indicates a pub brawl.  The patients are usually two of the lesser entrants who couldn't hold their own against their larger (and drunker) opponents.  Occasionally it's domestic violence or something similar where the two patients beat each other up.

Nope.  Not this time.  Not exactly.

When I got to the trauma bay a minute or so later, the first victim was obvious - a young woman sitting on a stretcher with a black eye, holding a toddler in her arms.  Since she looked reasonably ok, I immediately started searching for the second victim who I thought might need closer attention.  But the trauma nurse saw me looking around, smiled that "I-know-something-you-don't-know-but-will-definitely-upset-you" smile, and pointed to . . . the baby.  The same baby who was sitting happily in mum's arms, smiling, drinking a bottle.

I went back to Lisa (not her real name™) to assess the damage.  No instability in her face, no bleeding, normal eyesight.  Her 6-month old baby was happy as can be with no ill-effects whatsoever.  After speaking with Lisa for a few minutes, I got her story.  Apparently she had been arguing with the baby's father when he had punched her in the face (because that's apparently what people do when they argue).  Unfortunately the argument was taking place on the top of the stairs (because apparently that's where people argue), and Lisa had been holding the baby at the time (because apparently screaming at your mate while holding your child is normal behaviour).  She tumbled backwards down the stairs, baby and all.  She lost consciousness, but the baby was shielded by Lisa and wasn't even scratched.

I evaluated the baby, and he seemed completely fine, bright-eyed, not crying, uninjured.  I did a quick head-to-toe examination, and finding not a single mark on him or anything remotely resembling a traumatic injury, I sent him to the main department to be evaluated by the emergency physician.

Other than the black eye Lisa was also uninjured.  A CT scan confirmed no brain injury and no facial fractures.  As I was looking at her scan, a nurse brought in the baby.  To be scanned.

Yes, the emergency physician had bewilderingly ordered CT scans of the brain, spine, and face for the baby.  FOR THE BABY.  They were all negative.  Please try to contain your surprise.

What did not come back negative was Lisa's urine drug screen, which was positive for cocaine.

After the baby was cleared by the emergency doc, I sent them both home, still shaking my head in bafflement at the sheer absurdity of it all.

Did any of that make sense to any of you brave souls who stuck around?  Because none of it did to me.  Still doesn't.  I've read this back half a dozen times, and it's all completely ridiculous.
The only thing that makes less sense is that after it was all over, I went back and still ate that damned hamburger.
EDIT:
Several people have already pointed out the obvious that the emergency doc was just covering his ass by over-ordering tests.  While I understand that perspective, there was absolutely no indication to expose this child to any amount of radiation, let alone 3 CT scans' worth.
at October 05, 2015