SPOILER ALERT: IF YOU HAVEN'T READ OR WATCHED "GAME OF THRONES", WHAT THE HELL IS WRONG WITH YOU?  IT'S ONLY THE BEST TV SERIES EVER!  GET THE HELL ON WITH IT!  OH, AND DON'T READ THE LAST PARAGRAPH.

Jumbo eggs.  (Yes, I went straight from "Game of Thrones" to jumbo eggs.  It's just how I roll.)  Extra large sweatpants.  First-class airfare.  Prime beef.  All these things have something in common other than having nothing whatsoever to do with trauma.  Yes, the common thread is that they are the highest level, the biggest.  The top of their class.  Elite.  I could put "BMW-level douchebag driver" on that list too, but I can't decide if they're actually at the bottom of my list of asshole drivers or the top.  I should probably google that, but I have a point to make.

Right, the point I was desperately trying to make is that trauma patients have levels too.  Different hospitals have different code names for their various trauma levels, but just to simplify things I'll refer to them very non-creatively as 1 and 2.  The vast majority of patients who come in are level 2, the lower level.  These are folks who have fallen from a height of less than 10 feet, were in a car accident but are awake and alert with stable vital signs, were assaulted, shot in the arm or leg, etc.  Mechanisms of injury that shouldn't necessarily kill you in 5 minutes.

Level 1 trauma patients are those who may be actively dying either based on their presenting exam or how they were injured.  Falls from 60 feet.  Gunshot wounds to the torso or head.  Stab wounds with actively pulsatile bleeding.   Brains leaking out of ears.  I could go on, but I fear I'd lose some readers.

The medics in the field decide what level patients are prior to calling them in, but as I've said before I only believe about 10% of what I hear on The Box before they arrive.  Quite often, more often than I'd care to discuss, patients who should be a Level 2 are brought in as a Level 1 or vice versa.  Now of course I understand it is often very difficult for medics, who usually have no formal medical education, to determine who should be a high-level trauma.  Is this guy who fell off his barstool unconscious because he passed out or because he conked his head on the floor hard enough to bleed into his brain?  Is the heart rate 160 because he's bleeding to death or because he just mainlined cocaine and methamphetamine?  Is that blood on the patient's abdomen or intestine (yes, I've actually seen that confused)?  More often than not caution ("Better safe than sorry") takes the front seat over logic.

But sometimes the guys in the field just plain blow it.

The Noon Gunshot Wound is a rarity in my world, since these patients seem to enjoy getting shot closer to 1 AM for some reason.  If it were me, I'd much rather get shot during the day, since I would expect my trauma surgeon to be more alert at that time of day.  But maybe that's just my personal bias creeping in.  I digress.  Anyway, my pager alerted me just before lunch time that a Level 2 gunshot victim would be arriving in 5 minutes.  These are almost exclusively gunshot wounds to the arm, leg, foot, or hand; nothing that would be immediately life- or limb-threatening.  So I skipped (not really) down to the trauma bay expecting to greet a stable patient who could talk to me.

Instead, when Lawrence (not his real name™) rolled in, he was paler than the gurney sheet, sweating more than a marathoner in Dubai, with a blood pressure around 90/40 and a heart rate hovering around 140.  Even a blind man would be able to see that this man was actively dying in front of his unseeing eyes, but somehow the medics didn't.  It didn't help their case that Lawrence kept moaning "Please don't let me die!  Please don't let me die!"
That's invariably a very bad sign.

The medics seemed to have no sense of urgency as they rather sluggishly transferred him to our gurney.  "Multiple gunshot wounds, one to the abdomen, one to the left arm.  He's been like this since we found him."

LIKE THIS?  WHAT, YOU MEAN DYING!?  AND NOTHING ABOUT HIM SCREAMED "LEVEL 1" TO YOU IDIOTS?

A quick survey found one gunshot wound in the right lower part of his abdomen, a corresponding exit wound in his left flank, and another entrance wound in his left forearm as the bullet passed through him.
As you can imagine, there are A LOT of very important structures between those holes.
An even quicker poke on his belly elicited a very deep, almost primal growl, and 3.26 seconds later (I timed it) I was on the phone with the operating theatre staff telling them Lawrence and I would be there in 4 minutes.  I didn't bother getting an X-ray on his almost-certainly fractured arm, because that wouldn't kill him in the next hour.  Whatever was going on in his abdomen, on the other hand, would.

During surgery I evacuated about 2 liters of blood from his abdomen, found multiple active arterial haemorrhages in his mesentery (the blood supply to the intestine), along with 6 holes in his small intestine and 2 in his colon.  Ninety minutes, several units of blood, two small bowel resections, and two colon repairs later, Lawrence was admitted to intensive care where he stayed for a couple of days.  An X-ray that evening confirmed a left radius fracture, but fortunately he would not require surgery to repair it, just a cast.
In spite of, and certainly not because of, the medics' relative inaction, he walked out of the hospital 9 days later.

In full defence of my emergency medical personnel colleagues (who often do wonderful and heroic things), I completely understand that evaluating and labeling these people in the field can be difficult.  Determining who is severely injured can be next-to-impossible in certain situations.  But this one should have been easy.  As easy as pie.  A piece of cake.  Mmmm...cake.

It does make me wonder though, what injury would be necessary for this crew to call a level 1?  A Ned Stark-style decapitation? 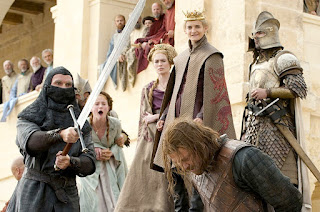 I told you there would be a spoiler.  Anything I can do to get a Game of Thrones reference in.