I love to learn.  When I was a child I had to read books or *gasp* listen to my teachers.  But nowadays the entirety of human knowledge is contained on a tiny device I keep in my pocket, and any information I could possibly want is simply a finger tap away (Hmm, why did Nicolas Cage change his name from Nicolas Coppola?).  My mantra in life is "Any day you learn something new is not a wasted day." 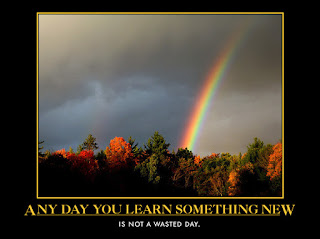 Well, that's only partly true.  My real mantra is "Don't be fucking stupid", but that doesn't look quite as nice on a picture: 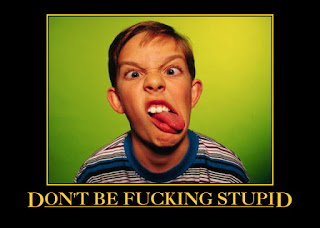 Actually I take that back.  I think it looks pretty damned spiffy.

Anyway, learning is one of the few true joys in life.  There are so many things to learn about, so many topics, so many funny cat videos on YouTube.  One of the best things about medicine (and surgery in particular) is that there are always new things to learn.  New drugs are discovered, new surgical techniques are perfected, new diseases are described, and new treatments are devised to conquer it.

When I was a child I thought Russian Roulette was a "game" played only in movies like The Deer Hunter.  But no, it turns out that there are some people stupid enough to have played (and lost) in real life.  And I found out recently that despite the horrendous stupidity that must by definition be inherent in the game, there are still people fucking stupid enough to play it.

This should not be a difficult concept to grasp for anyone with more than two brain cells to rub together, but pulling the trigger of a loaded revolver may result in a projectile coming out of the business end very fast.  Even if the gun only has one bullet in it, there is still at 16.67% chance that dangerous things will happen.  That's a phenomenon that is generally regarded as bad, especially when the gun is being pointed at something important, like, for example, a person's head.  Apparently Tracy and her friends weren't aware of the concept, because they all decided to play while "partying".

Nevertheless, somehow nobody lost.  Perhaps the gun wasn't actually loaded, or perhaps they all got very lucky.  Regardless, the game ended, and no one ended up with a bullet-sized hole in his or her cranium.  But the luck would run out a short while later when the game changed from Russian Roulette to Russian Poker.

I had never heard of Russian Poker before, but apparently instead of pointing the gun at your own head, you point it at someone else.  In other words, stupid goes to stupider.

If you can't hear that foreboding foreshadowing music, then you aren't paying close enough attention.

Tracy was clearly sick when she rolled through the trauma bay doors just before noon.  Not sick like *cough cough* but sick as in I'm About To Die, Please Help Me.

She was sweaty and had that glazed Don't let me die look in her eyes.  We stripped her clothes off quickly, and the medics were right - a single gunshot wound to the left lower abdomen near the pelvis.  We turned her on her side to examine her back, which superficially looked normal.  I then parted her buttocks (while the medics gaped) and found the other gunshot wound on the left butt cheek.  (Note to all future trauma surgeons out there - ALWAYS LOOK BETWEEN THE BUTT CHEEKS.)

Take two fingers and put one on your left lower abdomen beside and below your hip bone and one on your left butt cheek.  Don't worry, go ahead - no one is watching.  Good.  Now imagine a line between those two fingers.  There are a lot of very important structures there - small intestine, colon, iliac artery, iliac vein, ureter, possibly even the bladder.  A hole in any of them could be bad, but an injury to the iliac artery can easily cause fatal bleeding.

She needed to be in the operating theatre - NOW.

Ten minutes later we had her in the theatre where we first put in a bladder catheter, and her urine was clear yellow - good, the chance of a ureter or bladder injury was fairly low (though still not zero).  Five minutes after that I had my hands inside her abdomen.  There was a fair amount of blood, but no catastrophic bleeding.  Inner Pessimist quieted down somewhat as I breathed a brief sigh of relief and quickly examined her colon and found it to be normal (another happy surprise).  My Inner Pessimist finally stopped yelling as I ran her small bowel and found one small bullet hole, which I stitched closed.  I found the entry and exit wounds in the left lower abdomen/pelvis, and the bullet had missed the iliac vessels by less than 1 cm.  It had also missed the sigmoid colon by 1 cm, the bladder by 2 cm, and the ureter by 1 cm.

Now that is lucky.

A few days later as she was recovering she told me the story of how she got shot, including the game of Russian Poker that she had evidently lost.  "I didn't even know they had guns when I went to the party," she told me.  Yet that apparently didn't stop her from participating.  Any reasonable person would, oh I don't know, LEAVE.

But fortunately being a surgeon means constantly learning, and if there is one thing this episode taught me, it was to update my mantra: 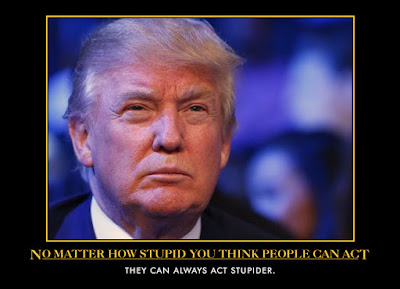