People sometimes ask me how I don't get sick at the sight of blood. It's a damned good question, and one for which I don't have a good answer. I've seen (and smelled) some of the worst things the human body can create, including gangrenous intestine, necrotising fasciitis ("flesh-eating bacteria"), Fournier's gangrene (google it if you dare), and horrible cancers. But it seems the most unlikely people are the ones who are the most likely to faint at the slightest drop of blood.

A group of very large marines were observing in my trauma bay. These are the toughest of the tough, men who can kill you 74 different ways with their pinky fingers and Scotch tape. One if them, a particularly burly fellow, kept pacing the room, excitedly asking when a "good one" was going to come in. The way he was jumping around, you'd think Santa was on his way with a shiny new bike.

Finally a good one came - a pedestrian hit by a dump truck at 80 kph (50 mph). Here's what the floor of the trauma bay looked like when we were done (yes, this is a real picture of my trauma bay last night after we finished): 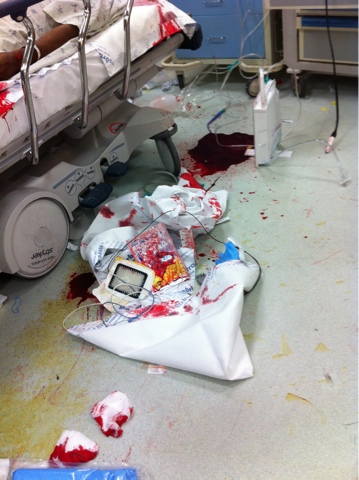 You'll notice a distinct lack of marine on the floor. That's because we had to pick him up and put him on the stretcher in the next bay after he fainted and fell straight back, landing directly on his clean-shaven head.
at February 02, 2012