Unpredictability is an inherent part of trauma - you never know someone is going to get shot or stabbed, you never know when someone will crash their car, when someone will get hit by a train, or when someone will fall off a roof.  And when someone DOES get injured and I need to take that person to the operating theatre, I usually don't know the extent of their internal injuries until I'm already inside them.  Part of the fun of trauma surgery is finding out what's wrong and then fixing it.  It's about discovery.  It's the same sense of adventure that prompted Erik the Red, Marco Polo, and Vasco da Gama...sort of.  Ok, maybe not.

But some discoveries just aren't fun at all.  Take for instance a 19 year old woman who was referred to me for abdominal pain.  Gallstones?  No.  Stomach ulcers?  Not at all.  Appendicitis, perhaps?  Not even close.  Her favourite pastime was inserting sewing needles into her abdomen.  That's right - she took these... 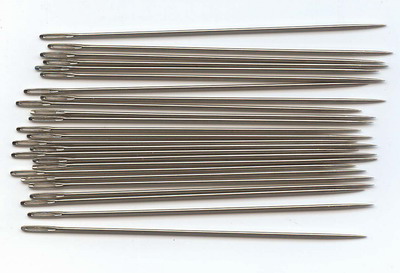 ...and pushed them through her abdominal wall until they were completely inside her.  How many?  Oh, about 14 or 15 at last count.  She chuckled a bit as she told me she just lost count.

Amazingly, none of them had done any real damage (other than some hideous scarring on her abdomen).  But now she had decided that she wanted them out because they were starting to hurt.

I said no.  Flat out, hands down, open and shut, definitive NO.

"But how can you leave them inside her??" I hear you asking.


If you haven't read my post about leaving bullets in, you can read about it here.  We don't usually remove foreign bodies in the abdomen, and this is much more dangerous - for me - than removing a bullet.  I looked carefully at her abdominal X-ray:

(Unfortunately, that's not her actual X-ray...she had a few more needles than this person.)

I then told her that there are at least 15 needles inside her, and any one of them could injure me (if I stick myself) or her (if I push the needle into something).

Go see a psychiatrist and get some ibuprofen.  In that order.
at February 16, 2012