I've had several questions asking about this next picture.  In case you haven't seen it, here is the picture: 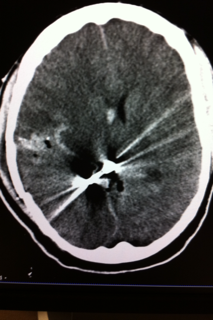 The story is not for the faint of heart, and it's enough to get your blood boiling.  A man was picking up his kids from their mother's house when they got into an argument.  His response to the disagreement was to go back inside, get his gun, and shoot her multiple times.  She was hit in the left arm, the abdomen, and the head.  I took her immediately to the operating theatre for a laparotomy where I found multiple perforations in her small intestine and colon, all of which I repaired successfully.  I then stayed to assist the neurosurgeon who performed a craniectomy - he removed a large piece of her skull, stopped the bleeding in her brain, and put the bone on ice to (hopefully) reimplant later.  This procedure allows the brain to expand outside the normal confines of the cranium, because there is very little room inside the cranial vault for the brain to go.  The picture above is her preoperative picture.  The bright white spot in the middle is the bullet sitting in the middle of her brain (no, we didn't remove it - see here to read why not).  And below is her postoperative picture. 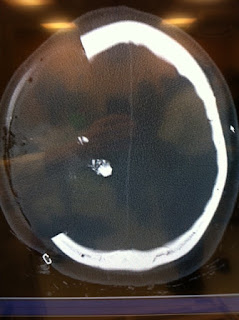 You can see where the skull is missing.  That bright white spot in the middle is...you guessed it, the bullet.


She survived, but unfortunately she has not woken up yet.  It's been just over a month and she remains completely unresponsive.  I discharged her to a nursing home a few days ago where she will likely live out the rest of her days like this.

They have not caught the shooter.  I can only pray for her and her children and hope that justice will be served someday.