There is a reason that many countries around the world (including mine, thankfully) have laws requiring seatbelts to be worn: China, Russia, Australia, EU, UK, United States (WHAT THE FUCK ARE YOU WAITING FOR, NEW HAMPSHIRE??!).  They save lives.  Unless I'm moving my car from one position in my driveway to another position in my driveway, I put it on (and even then I usually automatically reach for it).  I have to consciously try NOT to put it on.  It takes 4 seconds and it doesn't hurt, although it may hamper your ability to get your cell phone that you accidentally dropped while you were texting while driving.  That's a whole other rant I'll get into some other time. 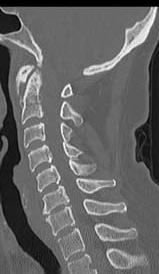 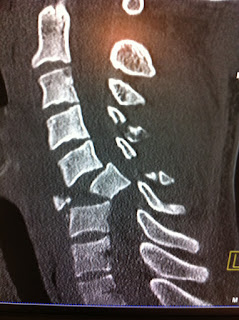 And this is his.  That his 6th cervical vertebra completely impinging his spinal cord.  He's now paralyzed from the neck down, forever, because he didn't put on his seatbelt.
at October 27, 2011