Before anyone starts attacking me, yes I know it could be spelled "yutes" or "utes", but according to the official script, it is "yoots", so I went with Yoots.  Just like the original patent for toilet paper shows it going over the roll, I consider that orientation to be correct.  And if you have no idea what the hell I'm talking about, go watch "My Cousin Vinny".  Right now.  Go.  Do it.  And do not come back until Vinny and Mona Lisa are driving back to New York.

I've often said that youth is wasted on the young, but then again so did George Bernard Shaw well before I first did (although his exact quote was “Youth is the most beautiful thing in this world—and what a pity that it has to be wasted on children!”).  In fact, I just told my children exactly that just a few days ago (the short version) when they were complaining about some movie not streaming fast enough.  At the time I decided not to delve into what it was like in the time before movie rentals when you just had to watch what as on TV, and then years later what it was like driving to a store to rent a movie, hoping they had the one you wanted, driving back to the store to return it, and paying late fees and fees for not rewinding (aka "The Good Old Days").  So instead I started boringly lecturing them on why they should be outside enjoying the weather, playing, frolicking, gamboling, and cavorting or whatever, rather than staring at a screen (which, ironically, is exactly what you are doing right now and also what I just instructed you to do).

Regardless, kids should be outside playing, not inside playing, as long as they are reasonably safe about it.  But during their development most kids eventually go from "I'm not sure I can do this" to "I AM INDESTRUCTIBLE!  I CAN DO ANYTHING!  WHEEEEEEEEEE!"  It's the childhood equivalent of "Hey I saw some guy do this in a movie once.  Here, hold my beer".  At this crucial point in their development children lose the ability to judge their own 1) abilities, 2) carelessness, and 3) bravado.

And Travis (not his real name™) is a perfect example of all three.

The first thing that told me that Travis was a completely normal teenager was that he was actively texting as he rolled through the door of my trauma bay.  That prompted my first eye roll of the encounter.

"Hi everyone, this is Travis."  He barely had the decency to look up at the sound of his name as the medics gave their report, but he at least grunted, eyes (and thumbs) still glued to his mobile phone.  That prompted eye roll #2.  "Travis was riding his dirt bike, no helmet, and he lost control, and he fell onto his left side.  He was going about 60 kph (35 mph) when he crashed."

The second thing that told me that he was a normal teenager (and that caused eye roll #3) was his response to that bit of information:

I think all the people in the trauma bay, myself included, groaned audibly in addition to rolling our eyes.  Clearly, everything this guy was going to say was bullshit.

Travis then flashed the universal sign for "METAL", grinned, stuck out his tongue, and went right back to texting.  Once again, he wasn't even able to muster up the decency to look at us or speak to us.

I can imagine his text was something lucid, intelligent, and well-thought-out, like this: 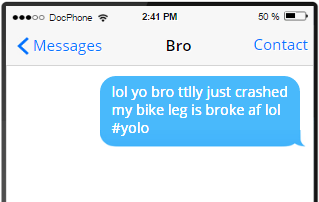 Travis seemed completely uninterested and unimpressed by the fact that his left leg had an extra bend in the thigh where it did not belong.  He continued grinning intermittently and making strange grunting noises under his breath as we finished our workup (still texting furiously), which demonstrated only an isolated left femur fracture.  The only thing I could think as I looked at his X-ray was, "I guess the fucking thing is broken."

Fortunately Travis' stay was short and uneventful, so I was not treated to very much of his teenage antics.  I heard about him flirting with several of the nurses, but they were just as unimpressed as I was.  And while he was with us his mother told me of several other not-quite-as-severe crashes he had recently had on his motorbike.

Once it was time for Travis to leave, I knew I had one more job to do: make sure this didn't happen again.  I had already told him in the trauma bay and the following day that he was lucky he hadn't sustained a serious head injury yet, and he had to wear a helmet whenever riding a dirt bike.  But I decided to drill it into his fortunately thick skull one more time.  With his mother in the room, I told them both that if Travis was going to continue riding his death machine, he at least had to protect his head.  Travis looked at me as if hearing this strange information for the first time, his expression clearly saying this: