Life on planet Earth is generally complicated.  There are way too many questions and very few definitive answers.  Why are we here?  What is our purpose?  Is there life on other planets?  If not, why not?  How can there possibly be a septillion (that's 1,000,000,000,000,000,000,000,000) stars (approximately) in the known universe with Sol being the only one to have evolved life?  But if there is other life out there, how is it possible that just one of them hasn't evolved to the point of interstellar travel and visited us?  Well, here is one possible explanation: 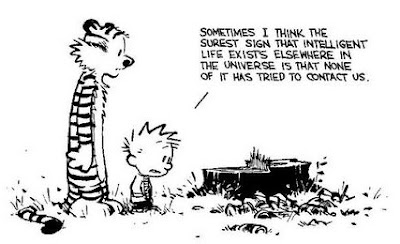 I didn't intend on going in this direction when I sat down to write this.  I should probably stop writing these when I'm post-call, sleep deprived, and caffeine deprived as well.  My brain starts doing strange things.  Let me try to get back on track.  Hm.

Anyway, with all the unknowns surrounding us, there are fortunately a few knowns, a few certainties, a few obviousnesses.  (Yes, I know that isn't a word.  It is now.  So there.)  For example: everyone reading this (and for that matter, everyone not reading this) will die.  Sorry if I just spoiled your day, but it's a natural part of every life (unless you are bitten by a zombie, then all bets are off).

There are a few more plainly obvious things that come to mind:
Those last two might not have been too obvious to me as I grew up, but after doing what I do for as long as I have done it, they certainly are now.  One of the basic tenets of life, something that I consider to be obvious, clearly is not to far too many people: Don't be stupid.  I don't mean "Don't be unintelligent", because not everyone is born with a high IQ and can understand quantum physics and do calculus.  No, by "Don't be stupid" I mean "Don't do stupid things".  Even smart people do stupid things sometimes (myself included), but there are some things that you just don't do no matter how stupid you are.  Anyone with an intelligence above the level of "cabbage" or "chihuahua" or "antivaxxer" should know not to do things that put himself, his children, and everyone around him in immediate and extreme danger.

Howard (not his real name™) apparently didn't get that message.

It was a Saturday night much like any other, which is to say that it was full of stupid people doing stupid things.  Stupid people getting stupidly drunk at the pub and falling in the parking lot.  Stupid medics not realising that the 90-year-old woman they brought to me as a trauma who had crumpled to the ground 4 days ago was severely dehydrated and septic and not a trauma patient.  Stupid people who still haven't figured out how to call a cab instead of driving home drunk.  Howard fell into that last category of course, though I had a total of four similar patients that night, all after midnight.  Of course.

At first he seemed like any other drunk driver - just merely a guy who had drunk too much and run his car into a tree.  I'm always just a tad gratified when a drunk driver is in a single-vehicle accident, because at least he hadn't injured any innocent bystanders, bywalkers, bybicyclists, or bydrivers.  Yes, I just created "bywalkers", "bybicyclists", and "bydrivers" too.  This is a good day.

Howard admitted to having "Two drinks" at first, which changed to "A few drinks" several minutes afterwards, to "A lot" a bit later.  He was complaining of pain in his left thigh, which made me worried that he had fractured his femur.  But as we continued asking questions, the real Howard made himself known awfully quickly.  He started acting obnoxious and entitled, but when the police showed up, he stopped cooperating entirely.

Our workup was fortunately fairly benign - no femur fracture, just a few bumps and bruises and a minor pelvic fracture that would require nothing but pain medicine and time.  But just as quickly as my worry turned to relief, my relief turned to outrage when the police gave me the real story.

Howard had gone to a friend's house for a night of drunken carousing and debauchery (I assume), but he hadn't bothered to find a babysitter for his twin boys, so he had brought them along.  The boys, if you are curious, were all of 18 months old.  I don't know what possessed him to drive home drunk with his twin toddlers in the back of his car instead of calling a taxi.  And I definitely don't know what made him think that going close to 200 kph (around 120 mph) while drunk was a good idea.  WITH HIS TWIN TODDLERS IN THE BACK SEAT.

I was informed that the boys had been taken to the local children's hospital, but that by some stroke of good luck, both were ok.  I couldn't help but think that if Howard had been a victim of drunk driving (rather than a perpetrator), his boys probably wouldn't not have been so lucky.  Bad guys always seem to get away with it, for some stupid reason.  And if you're wondering where the boys' mother was, I didn't get that far in my questioning.  I had to go find a safe space to scream my fool head off.