Take a little ride with me.  Yes, you.  We're going on a trip, you and I.  Close your eyes.  Now imagine a house, a big house.  A beautiful house.  This house has a wide, lush green lawn, quaint blue shutters, and a sparkling pool in the back.  The house sits on a calm, pristine lake and has a private dock where there is a boat tied up.

Unfortunately your own house burned down some time ago, and now you have nowhere to live.  So you look at this house, and you love it.  You want it.  Not only that, you need it.  You see, it's cold outside, and you have no shelter.  Any day now you fear that you will succumb to the elements.  Your desperation is reaching a critical point.

Then one day as you are standing there staring at this dream house, a man approaches you, seemingly out of nowhere.  He has a smile on his face as he confidently walks up to you and hands you an envelope without a word.  He then smiles warmly once again, turns, and walks away.  Confused, you open the envelope, and inside you find a set of keys.  Looking further you pull out a sheaf of papers - a deed.  No, not just a deed, the deed.  The deed to this house.  The deed to this house with your name on it.

What?  What is this?  Has someone really just given you a house??  Is that even possible?  You tremulously try the key in the door, and it works.  The door swings silently open and you walk inside, incredulous at your luck.  The house is fully furnished.  Even the refrigerator is stocked with food, everything you could want.  You start to tear up as you realise that it was just before you got to the point where you thought you might die that some kind benefactor you don't know and will never meet has given you the greatest gift you could imagine, exactly what you need to live.  Someone has given you the gift of another chance at life.

What do you do to repay the kindness of a complete stranger?  What could you possibly do to show your gratitude?  How do you respond?  I'll tell you:

You throw a huge party, you shit all over the house, you tear it apart, and then you burn it to the ground.  On purpose.  THAT is what you fucking do.

Wait, what?  Why would you do such a thing?  What kind of asshole would take such a gift and stomp all over it?

Zachary (not his real name™), that's who.  Why?  Why would he do that?  I have no idea, you'll have to ask Zachary, because he's the only asshole I know with experience with this kind of utter twatfuckery.

It was a typical Saturday night, which is to say that everyone who rolled through the door of my trauma bay, whether he had fallen, gotten into a car crash, was assaulted, or was stabbed in the head, was drunk.  And Zach was no different.  I believe I saw every type of drunk that night, and Zach was a Type 5 Drunk, meaning he thought he was much funnier than he actually was, which was not at all.  Not even a little bit. 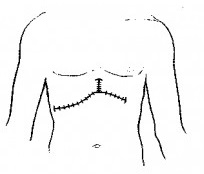 After getting the story from the medics (car vs tree, tree wins), we started our examination of Zach from head to toe.  This always involves undressing the patient completely so that we can look at everything.  His shirt was barely halfway over his head when I recognised a tell-tale sign on his abdomen:

This was no ordinary scar, and I could have recognised it from across the room.  Anyone who knows anything about surgery will know this immediately as a liver transplant scar, and if you didn't know that before, now you do.

I'm going to pause here to let this scenario sink into your brain for a moment before I go on, because I can feel my blood starting to boil just like it was that night.  If yours isn't yet, it should be.

Ok, ready to go on?  I'm going to skip the remainder of Zach's story, because 1) it isn't that interesting, and 2) just thinking about it is enough to make me want to throw my computer out the window (Zachary was fine despite his best efforts to kill himself and everyone around him).  The short short version, the reason I was so angry, is that Zach had killed his original liver with heavy alcohol abuse over many years, he got a new one, and he was now pissing it away by drinking again.

If you haven't figured out why I'm so angry then you haven't been paying attention and WHY THE HELL ARE YOU EVEN HERE.  *DEEEEEEP breath*  I'm sorry, I shouldn't direct my anger at you when it isn't your fault.  That isn't fair.

Think of the house.  Like in that imaginary scenario, Zachary was given an extraordinary gift - a new liver, and a new chance at life.  There are no two ways about it; without the new liver, he would have died a horrible early death.  But Zachary was saved.  Some poor soul gave his or her own life to give Zachary a second chance, a new life, and Zach thanked his anonymous benefactor by treating his new liver exactly the same way as he treated his first liver: by shitting all over it.

The things I see in my trauma bay often amuse me, sometimes they sadden me, and sometimes they confuse me.  Rarely, however, do they infuriate me.  Zachary infuriated me.
Perhaps I'm out of line.  Maybe I'm just being dramatic and stupid and I'm over-reacting over nothing.
No.  No I'm not.
at April 24, 2017