Oh, what a bad week for science this has been, and for vaccines in particular.  If anyone even remotely follows science news (or me) on any social media, you know exactly what I'm about to talk about.  No, I'm not even going to focus on the story two days ago about Donald Trump purportedly talking with anti-vaccine lunatic Robert Kennedy Jr. about possibly heading a possible presidential commission on vaccine safety and scientific integrity.

Having an anti-vaccine advocate head up a commission on vaccine safety would just as ridiculously stupid as
No, we're going to ignore that utter travesty for a bit since Trump's team seems to be denying that they offered Kennedy anything (and thank god for that) despite the fact that Kennedy said, and I quote, "[Trump] asked me to chair a commission on vaccine safety and scientific integrity [...] and I said I would."  Fake news, indeed.

Instead we're going to focus on the other insanity that cropped up nearly a week ago.  I've been trying to figure out how exactly to write about it, because it caused such a visceral reaction of anger and pure outrage that I was forced to buy a new computer after smashing my old (new) one against the wall, throwing it out the window, running it over with my car, and setting it on fire.  Unfortunately that did not cause the ridiculousness in question to disappear from the internet.

What I'm talking about is a piece written on Cleveland.com by an actual, real doctor at the actual, real Cleveland Clinic, which hit on so much antivax bullshit I can't even begin to count.  How many?

All of them, I think.

I'll start by saying that this was written by Daniel Niedes, MD, who is the director . . . THE DIRECTOR of the Cleveland Clinic Wellness Institute.  For me, that's a clear strike 1.  Whenever I see the word "wellness" or "integrative" or "holistic" (or "organic", for that matter), it stirs within me an unease that can only be mollified by coffee or a full fat, GMO, mostly gluten, chock-full-of-real-non-organic-sugar doughnut.  Or coffee and a doughnut.

Dr. Niedes isn't some naturopath.  He isn't a homeopath.  He isn't a chiropractor.  No, he is by all appearances a stand-up physician, fully qualified, board certified in family medicine, and working at the prestigious Cleveland Clinic.  This isn't some fly-by-night walk-in clinic, this is THE CLEVELAND CLINIC, easily one of the most famous and well-respected medical facilities in the entire world.

That's what makes this so infuriating.

The title of Dr. Niedes' piece is "Make 2017 the year to avoid toxins (good luck) and master your domain: Words on Wellness".  And that is strike 2.  A real doctor used the word "toxins".  I'll ignore the "master your domain" bit, as I'm sure we've all seen the Seinfeld episode and remember it well, and I can't even imagine what Dr. Niedes was thinking when he used this particular phrase.

Anyway, I'll go through the piece line by line, step by step, and I will quote from it liberally so we can all bask in its bullshitty glow.  Ready?


"I am tired of all the nonsense we as American citizens are being fed while big business - and the government - continue to ignore the health and well-being of the fine people in this country."

Whoa whoa whoa, stop right there bucko.  This is the very first line, and he's already DEEP in bullshit.  He's starting off at the very top with the BIG PHARMA WANTS TO KEEP YOU UNHEALTHY crap, and I don't give a flying fuck how tired he is with his made-up nonsense, I'm absolutely sick to fucking death of people thinking that doctors are trying to keep people sick to make money.  And this is a DOCTOR saying this!

It gets worse.  MUCH worse.

Yes, he delves into the thimerosal wastebin next.  Let's first remind ourselves that thimerosal IS NOT MERCURY.  Thimerosal is ethylmercury, which is safe and is rapidly cleared from the body, as opposed to methylmercury which is much more dangerous and commonly found in fish, and as opposed to elemental mercury, which is obviously unsafe.  But it is NOT mercury!  Also, thimerosal has been shown to be safe and does not cause autism.  And then he goes straight into the formaldehyde bullshit!  The amount of formaldehyde in a vaccine is far less than the body normally produces in a day, and it is rapidly metabolised.

Bullshit.  And we're not even out of the third paragraph yet.

Ha!  I actually laughed out loud at this.  1) He calls the flu shot an "unsafe product", and 2) getting a minuscule dose of formaldehyde landed him in bed and caused him to miss two days of work.  Are you fucking kidding me?  Are you actually accusing 0.1 mg of formaldehyde of making you that sick?  Do you even realise it took your body about 9 minutes to metabolise 99% of that formaldehyde, which your body is constantly making?

But Dr. Niedes is angry.  Angry at "toxins".

He doesn't say what these toxins are or what chronic diseases they cause.  Just nebulous nefarious TOXINS.  But whatever these TOXINS are, he's not done complaining about them.  There are just so many CHEMICALS in our environment, and evil scientists are coming up with more of them EVERY DAY:

So many toxins!  This made me laugh out loud again.  He goes full Food Babe and implies that ingredients are toxic if you can't pronounce them.  However, safety of a product is not based on your ability to pronounce the name of it.  I can pronounce "ricin" and "pit viper", but that doesn't make them remotely safe.  That is a stupid argument of a stupid person.

What are these evil toxins?  And where is the evidence that these purported toxins actually cause this laundry list of diseases (including autism, of course)?  He never specifies.  He only makes these vague statements with absolutely no facts to back them up.  And if you thought this was really bad already, it's about to shoot straight down the conspiracy theory tin-hat rabbit hole with extreme alacrity. 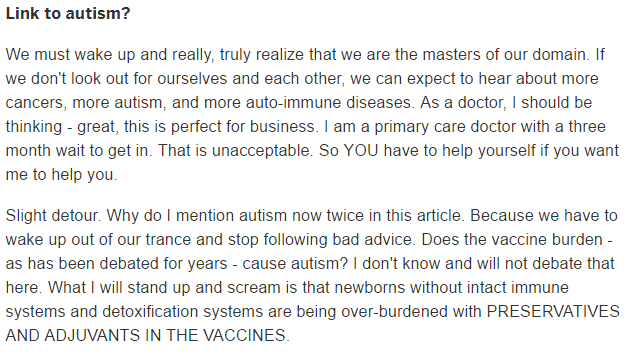 I read this passage with my mouth literally agape.  HOLY FUCKING HELL, HE JUST WENT THERE.  I had to read it twice just to make sure my eyes were not deceiving me.  Of course he uses the typical antivax approach of "just asking questions", which makes it on the surface look like he isn't actually saying that vaccines cause autism, but it is EXTREMELY clear that he IS saying that vaccines cause autism.  He says he is not going to debate it, but there's one problem: EVIDENCE ISN'T A DEBATE, JACKASS.  The evidence clearly and convincingly shows that there is no link between autism and vaccines.  I've talked about that too many times to count here, and I won't do it again.  How does a board certified family practitioner not know this?  He claims he isn't going to debate it, but in the very next paragraph:

There.  Right there.  There is no other way to interpret that other than "Dr. Daniel Niedes believes vaccines cause autism".  But he's not done.  He goes on to the next antivax gambit about why we give Hepatitis B vaccine to newborns.

Sigh.  Exposure to the Hep B virus is unlikely, but it is not impossible, and we have a vaccine that can prevent it.  Why take the risk?  The shot is very safe, and it could prevent a horrible disease.  And what is this bullshit about "immunity may not last"?  Really?  I guess Dr. Niedes missed this article last year in the very obscurely titled JOURNAL OF INFECTIOUS DISEASE which shows quite clearly that the Hepatitis B vaccine offers immunity for at least 30 years (I say "at least" because that's how long the study has been ongoing).  Doctors who take care of children (like Daniel Niedes) need to stay up with the latest research, and Dr. Niedes clearly has not.

He then detours to a slightly less insane place, talking about eating better, avoiding unsafe food ingredients, and self education.  These are all things that no rational person could possibly disagree with.  I thought he might end on a high note, but my hopes were immediately dashed:

Almost as disheartening as the bullshit piece itself is the comment section.  Way too many people believe that Dr. Niedes is a hero for "standing up" to mainstream science and medicine and voicing the opinion that they all hold.  This is the very definition of confirmation bias - they read that an actual doctor shares their opinion that vaccines and TOXINS are evil, and this reaffirms their belief that vaccines and TOXINS are evil.  Facts don't matter, evidence doesn't matter, data doesn't matter.  All that matters is that this real doctor at a real institution with a really prestigious name agrees.

For their part the Cleveland Clinic has disavowed the article and has promised "appropriate disciplinary action", whatever the hell that means.  And Dr. Niedes has since apologised for the piece (which will accomplish exactly fuck all), and said:

"I apologize and regret publishing a blog that has caused so much concern and confusion for the public and medical community. I fully support vaccinations and my concern was meant to be positive around the safety of them."

Confusion?  There's no confusion whatsoever, Dr. Niedes.  You can stomp around and claim to be pro-vaccine all you like now that there has been a firestorm of backlash against you and your institution, but your words have definitively proved otherwise.

But in 2017 words cannot simply be withdrawn.  The proverbial cow is out of the proverbial barn, and the internet never forgets.  Just like with Andrew Wakefield's original bullshit Lancet article in 1998 that was subsequently withdrawn for being the elaborate fraud it was found to be, the damage to public health is done, and I have no doubt it will be long-lasting.  Antivaxxers for years to come will hold up this ridiculous piece as the proof that they need that they are right and scientists, immunologists, paediatricians, infectious disease doctors, the World Health Organisation, and every single major medical association on the entire planet are wrong.

In closing, I have one simple question for Dr. Niedes: Do remember that basic tenet of medicine that every medical student on Earth is tought, primum non nocere?  Well today, you caused harm.  A lot of it.  Children will literally die if their parents believe the stupid bullshit you spewed and choose not to vaccinate them.  Not a lot of them, thanks to modern medicine, that same modern medicine that you chose to denigrate with extreme prejudice.  But some inevitably will.

And in this day and age, just like your bullshit-filled column, any death from a vaccine-preventable disease is absolutely inexcusable.
at January 12, 2017