I am very proud of the fact that the stories I tell here are true (with certain details altered for anonymity's sake, of course).  I've confessed in the past that one of them was wholly plumbed directly from the depths of my imagination, but I've also confessed that that may not, in fact, be true.  I always change names, I usually change ages, and I sometimes change genders, medical history, and certain extraneous diagnoses.

For this story, however, I have changed nothing.  Not only because I don't know any of the details, but because the story isn't mine.

I do apologise, but the story you're about to read (hopefully you've stayed with me so far) and the pictures you're about to see are stolen borrowed directly from the New England Journal of Medicine.  As much as I enjoy using only real pictures of my own patients, this one was just too damned good to pass up, and I felt the need to share it with you fine folks.

I know I discuss the Call Gods regularly, and I'm sure everyone must be sick and fucking tired of hearing about them.  But they keep rearing their ugly heads, so I feel compelled to keep sharing.  But the good news about them is that I'm not their only victim.  There are plenty of other trauma surgeons out there as well, so the Call Gods are free to take out their wrath and bestow their gifts on them too.

In the interest of time, I'll dispense with the story (probably because I don't know it), except to say that it was a 33-year old man who was involved a motorcycle accident (of course it was a goddamned motorcycle) in Germany.  On initial examination his scrotum was swollen and blue (and before you ask, no, "blue balls" aren't actually blue), and though he had some other injuries (fractures of his forearm and hand), his pelvis X-ray revealed something a bit . . . surprising: 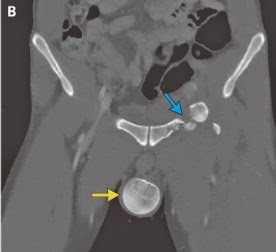 In case you can't read pelvis X-rays, the title of the article is a dead giveaway:

Femoral-Head Dislocation to the Scrotum

HA HA! laughed the Call Gods.  OF COURSE IT'S POSSIBLE!  JUST LOOK AT THAT X-RAY, MORON!

The blue arrow in the photo is pointing to some other pelvic fractures, but that yellow arrow is pointing to the money shot - that's the head of his femur (the thigh bone) in the patient's scrotum.  How it got there is completely beyond my limited imagination, but a CT scan confirmed the diagnosis: 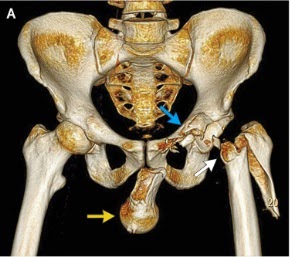 I'll dispense with the obvious "boner" jokes at this point. 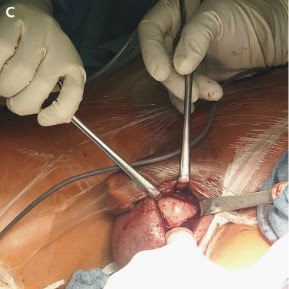 . . . and then, with the assistance of some wires, plates, and screws, they put it back where it belonged: 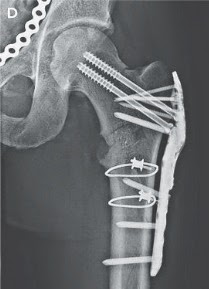 If the pictures aren't amazing enough, the man made a full recovery and was walking without the assistance of a cane only 14 months later.

I have shown these photos to several of my orthopaedic colleagues, and they all have the same reaction I did, which is somewhere between sheer disbelief and "HOLY FUCK!".  One of them mentioned that he has never, ever made an incision in the scrotum and hopefully would never have to.  Fortunately for the motorcycle-riding population of earth, this is a once-in-a-career type of injury.

But freak injuries like this do confirm one thing: the Call Gods aren't nearly through with me yet.
at May 19, 2015