One of my favourite bumper stickers says “HANG UP AND DRIVE!”  There are very few phone calls that absolutely must be made while driving, and even fewer text messages that simply must be sent.  Even using a hands-free device doesn't help you keep your concentration where it belongs nearly as much as you may believe it does.  Probably 99.99% of mobile phone-related accidents could be avoided if people simply set their phones aside and concentrated on the road like they were taught to do.

But I saw a similar bumper sticker recently that infuriated me, and I'll be goddamned if I'm going to keep my stupid mouth shut about it: 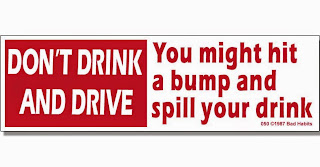 HA HA!  It’s totally hilarious, right?  HA HA!  Oh my, I laughed and laughed.  Har dee fucking har har.  Make a fucking knee-slapping joke about drunk driving, something that kills and maims thousands of people every single year.  I wanted to jump out of my car onto their hood, climb into their car, rip off their steering wheel, and beat them with it.

Fortunately I was parked in a lot and the driver of the offending car was nowhere to be seen.  Even more fortunately, I wouldn't actually ever assault anyone.  I don't think.

Anyway, after screaming and fuming and ranting and raving like a deranged lunatic, I started actually thinking about why I was so incensed.  And after ruminating for a while, I realised that the reason I was so angry is that the bump you just hit that caused you to spill your drink might have been a pedestrian who wasn’t looking where he was going because he was looking down at his phone while crossing the street.

This leads (yes, finally) to my point:

Unless you live in the Brazilian rainforest, it is impossible to walk around without seeing people looking down at their phones - playing games, texting, tweeting, instagraming, snapchatting, or whatever the hell people do instead of looking up.  I’ve seen people walk into walls, trip over curbs, walk into people, and nearly get hit by cars, all because they weren’t looking where the hell they were going because they just had to update their Instagram with whatever the fuck they just ate.

Do you really think anyone gives a flying fuck how omg totally delish your lunch was?  Does anyone actually want to see a picture of your salad?  And if so, do you really need to upload the picture while crossing 4 lanes of traffic?

“just got hit by a car going 2 hospital lol”

Seriously, people?  Is everyone that willfully oblivious?  Is it really more important to take your next turn on whatever stupid game you're playing than to make sure you don’t get run down trying to cross the street?  Even Frogger was paying better attention to traffic than you are, and he was a goddamned 1980s 8-bit frog!
If you want to tune out your family and watch the latest fail video compilation on YouTube while you’re out to dinner, fine.  The only things you'll miss are conversation and real social interaction.