All sorts of guys who fancy themselves badasses end up in my trauma bay.  They are large men often covered in tattoos including such macho things as "TENACIOUS", "BAMF", "BADASS", and the like.  They've spent a good amount of time at the gym working on their manly physiques and are obviously quite proud of themselves.

And these are the same grown men who scream out for mama the moment an IV is placed.

I'm sorry sir, but if you can't tolerate an 18g catheter going into your arm, you are most assuredly not a tenacious badass.

After I saw yet another one of these crybabies in my trauma bay whining about how the 2cm laceration on his knee was killing him (it wasn't), I started wondering what a real badass - someone who isn't afraid to look danger directly in the eye and growl "BRING IT ON" - looks like.

I didn't have to wait long to find out.

The 20ish year old gentleman, covered from the waist up in tattoos, happened to be at the wrong place at the wrong time, and he was shot in the leg with a large caliber handgun.  The bullet entered his left outer thigh, went through his quadriceps muscles, exited the inner thigh, re-entered the right thigh, traveled directly behind his knee (exactly where the blood vessels and nerves run), and exited his outer thigh just above the knee.  He predictably had no sensation below the knee, and he was actively pumping blood from his leg into the outside world from one of the holes in his right leg.

My physician assistant Anne (not her real name) immediately jumped into action and placed her finger in the hole to stop the bleeding, the proverbial finger in the dike.  I had to attend to another man (brought at the same time by a different ambulance) who, in a failed attempt to end it all, had stabbed himself twice in the abdomen and was actively emptying his blood volume onto the floor as well.

The janitors are going to be busy tonight, I muttered to no one in particular as I stepped over another blood pool and did a quick evaluation of Dude #2 (not his real name).  I immediately saw that it was indeed an arterial bleed, but fortunately it was superficial.  I needed to get his bleeding stopped, but I could do that under local anaesthesia right here in the trauma bay.  He didn't need the operating theatre - the other guy did.  NOW.  I grabbed one of the students milling around the room and stuck her finger in his dike and ran back to the first guy.

Anyway, I did a cursory examination of Badass #1, and he had no movement, no sensation, and no pulses in his right leg below the knee, a sure sign that the bullet had transected his popliteal artery and tibial/peroneal nerve.

He needed immediate operative attention.  But before he could go to the operating theatre to try to repair the damage, we had to get that bleeding under control.  Despite Anne's finger in the hole, he was continuing to bleed to death around it.  I placed a tourniquet just above his knee, but when I tried to tighten it down, the mechanism jammed, and the tourniquet failed.  And of course that was the only tourniquet in the entire trauma bay.  I yelled to the entire room for anyone to call the operating theatre and have them send up one of their surgical tourniquets, but I knew that it would take at least 5 minutes to arrive.
That's five minutes we didn't have.
With Anne's finger still in the hole trying to stem the tide and a flood of people running around looking for something, anything to use as a tourniquet, I ran off to look myself.  I chanced a quick glimpse at Dude #2 (no active bleeding) and then bolted.
Though it seemed like an hour, in reality it took me no longer than 2 minutes to run around the entire emergency department and determine that there were no other working tourniquets.  Dejected but determined, I ran back into the trauma bay, but what greeted me was not hysteria or chaos, but a quiet, serene scene.  Was I too late?  Had he bled to death and died?
Nope.  The bleeding had stopped.
Dumbfounded, I walked up to Badass #1.  Around his lower thigh there was a makeshift tourniquet comprised of a waistband tie from a pair of scrub bottoms and trauma shears that was fabulously effective. 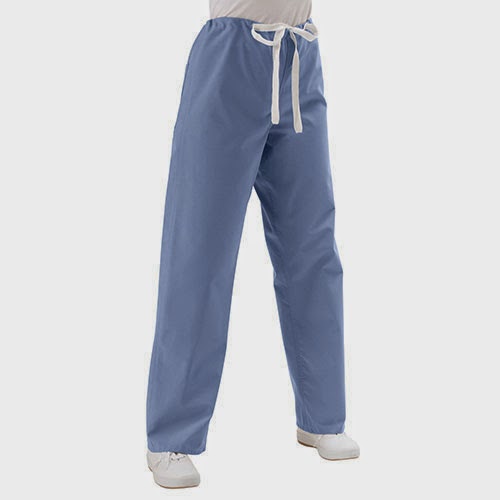 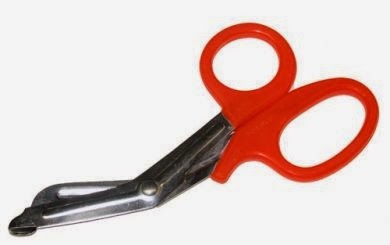 I looked over at Anne and immediately noticed four things: 1) she was covered in blood, 2) she had a sheepish, though triumphant, grin on her face, 3) her trauma shears were missing from her waist, and 4) her scrubs' entire waistband, tie included, had been roughly cut off.
That's right - in the 2 minutes I was gone, Anne had cut the waistband from her own scrubs, fashioned a tourniquet using the very shears she had used to cut the pants, and probably saved the guy's life.
Forget the burly guy with the tattoos - THAT is bad ass.
at July 11, 2014