I have a cold.  I have a god damned cold.  I realise everyone hates having a cold, but I HATE having a cold.  I can't take sick days, so I have to fake it and pretend that everything is just hunky dory.  But I can't decide what my least favourite symptom is -
Despite thousands of hours of medical education, I still can't figure out how or why a cold makes me feel like such shit.  I weigh billions of times what a virus weighs.  How the hell can such a tiny virus take me down?  Granted, there are millions of them working and only one of me fighting them, but I should still be able to fight it and GOD DAMN YOU ADENOVIRUS YOU FUCKING EVIL PIECE OF #*(&!@^$)@%&#

Ahem.  Sorry about that.  Where was I?  Right, my cold.  At work I do my damndest to keep myself presentable and not snozzle on my patients.  Yes, "snozzle" is the technical term.  Unfortunately I suppose I wasn't doing a good enough job of faking it, which prompted my patient to turn the tables and give me some helpful (yet unsolicited) medical advice:

"Doc, you should go get some Oscillo!  It works great whenever I have a cold."

She must have seen the blank look on my face (though I may have just been daydreaming of my impending death), so she said, "You know, oscillococcinum.  It's wonderful!"

Oscillo?  The name sounded familiar, but I couldn't place it.  Was it a brand name of a new cold medicine?  Had I seen an advert somewhere for it?  Had I taken it as a child perhaps?  I thanked her for the recommendation, and on my way home I stopped at my local apothecary/pharmacy/drug store/chemist to have a look and find my salvation.

I walked down the "Cold and Flu" aisle and saw the usual suspects, the medicines with the long, unpronounceable names which had become my best friends since my plague began - phenylephrine, guaifenesin, pseudoephedrine, dextromethorphan, doxylamine.  And then . . . I spotted it. 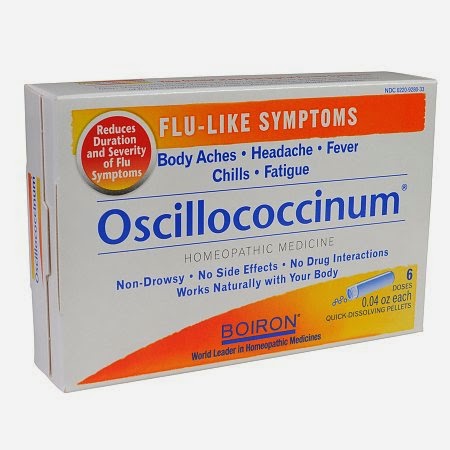 Aaah!  Yes there it was, shining up at me like a beacon from a lighthouse directing me to shore!  At last, my relief!  My cure!  My . . . wait just one goddamned second, does that say "HOMEOPATHIC"?

I think I actually said "FUCK!" out loud when I spotted it, much to the chagrin of the elderly lady behind me looking at the selection of laxatives.  For those of you unfamiliar with the concept, homeopathy is based partly on the outdated and wholly-unscientific concept of "similia similibus curantur", or that like cures like (in case you forgot your Latin).  In other words, if you have an ailment, it can be treated by giving a small dose of the causative agent.  Hippocrates (yes, he of the oath) is said to have started the practice by treating mania with small doses of mandrake root, which can also cause symptoms of mania when give in larger doses.  Samuel Hahnemann expanded the idea in the 1800's when he ate some cinchona bark (which was used to treat malaria) and developed symptoms similar to those of malaria which the cinchona was supposed to treat.

In a brilliant feat of psuedoscientific flatulence, Hahnemann postulated that if small doses are good, then smaller doses should be better.  He began diluting things like salt, arsenic, and bushmaster snake venom by factors of 100 (which he oxymoronically called "potentisation") and then striking the solution against an elastic object in a process he called "succussion" (his object of choice was a wooden board covered by leather and stuffed with horse hair - yes, seriously).  He would then dilute it by a factor of 100 again.  And then again by 100.  And again.  And again.  And . . . you get the point.  Followers of homeopathy believe that despite the dilution, the water somehow "remembers" the property of whatever is being diluted . . . which of course is physically impossible and firmly enters the realm of magic.

As I remembered this information, I looked at the box to see what the ingredients were, and what I saw actually made me laugh.  I may even have uttered the word "LOL" aloud by accident (the lady behind me was still choosing her laxative).  Directly from the box:

What the hell does that mean?  Well if you had paid more attention in Latin class (haven't we been through this already?) you'd remember that "Anas barbariae" is a type of duck, and that "hepatis et cordis" means "liver and heart".  To prepare this concoction, they first take...

"Wait wait wait.  Duck liver and heart?  What the fuck are you on about, Doc?  I thought this was supposed to be a flu remedy?"

Ok, let me explain.  No, there is too much.  Let me sum up.  You see, Joseph Roy, a French physician practicing during the 1918 influenza pandemic (which killed about 5% of the world's population) looked at the blood of flu victims under a microscope and saw some oscillating bacteria which he called "oscillococcus".  He postulated (incorrectly) that this was causing the flu (as well as rheumatism, measles, cancer, and tuberculosis).  He then continued his search for a cure until he found the mysterious oscillococcus again, this time in duck liver.  Operating under the premise of "similia similibus curantur" he prepared a remedy by serially diluting bits of duck liver and heart.  Now other than Dr. Roy, no one in the history of mankind has ever seen this oscillococcus, so I don't know what the hell he thought he was seeing.  Regardless, we now know that the cold (and flu) are caused by a virus, not bacteria.  As ridiculous as it is, it at least lends a whole new meaning to the term "quack", though.  Har har.

Anyway, I looked back at the description of Oscillococcinum.  See that "200CK"?  That means it's been diluted by a factor of 100 not once, not twice, but 200 times.  It is so dilute that you would need to take 2 billion oscillo tablets to even get ONE MOLECULE of the "active ingredient", which doesn't even have any medicinal property anyway!  Then I took a look at the ingredients on the back of the box: 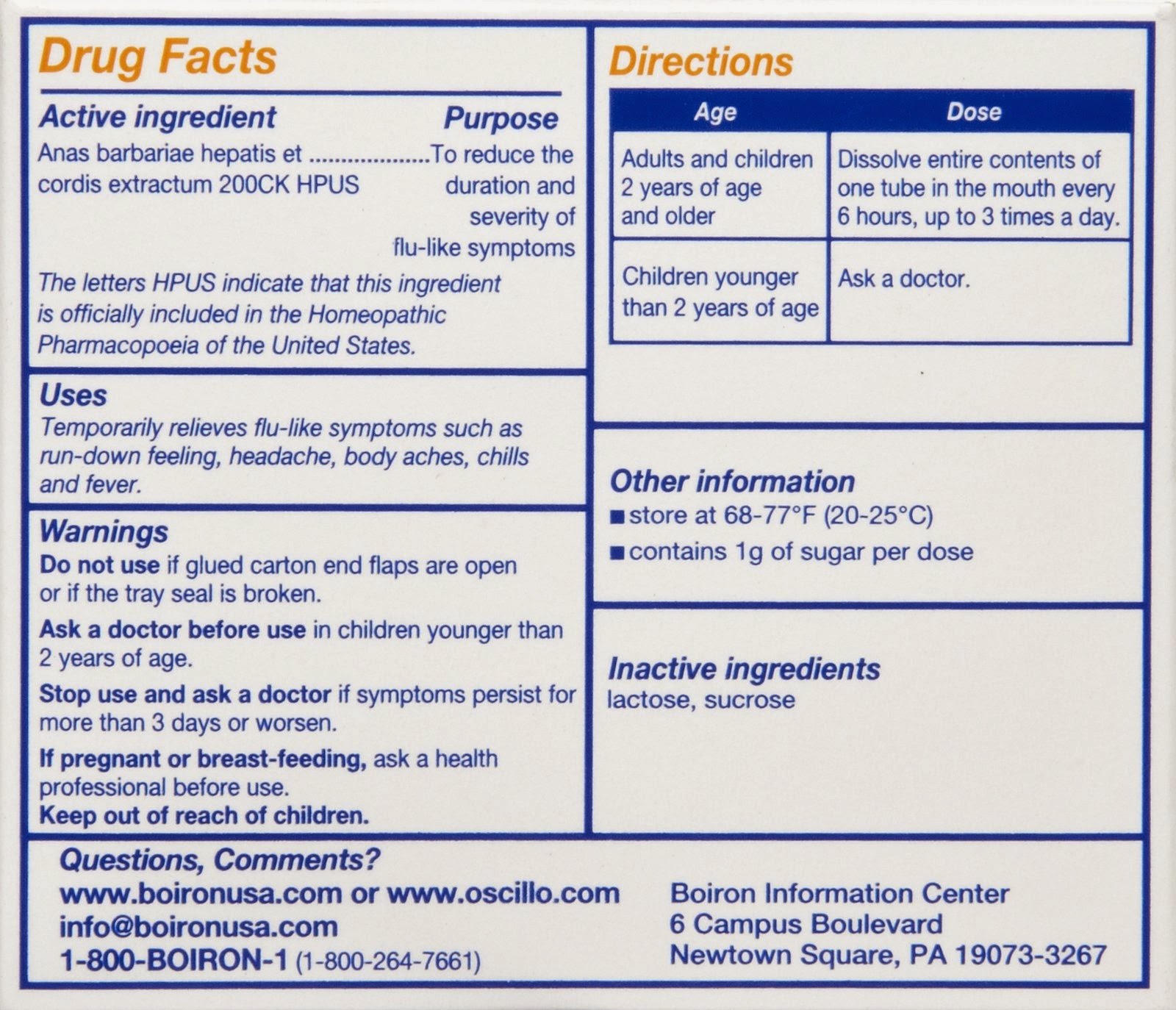 The inactive ingredients are sucrose (that's table sugar) and lactose.  Each tablet, which weighs exactly 1 gram, contains 1 gram of sugar according to the box.  SO THE WHOLE FUCKING TABLET IS SUGAR.

But wait, it gets more absurd - go back and look at the "drug" facts.  It warns against giving a pure sugar pill to pregnant or breastfeeding women.  It also recommends consulting with a doctor before giving a sugar pill to children under 2.  Since when do we not give sugar to pregnant women or children?  My daughter would be heartbroken if she could never again eat M&Ms (which have exactly as much medicinal properties as oscillococcinium, by the way).

And it gets even worse.  The box says it "Works Naturally with Your Body", is "Non-Drowsy", has "No Side Effect:", and has "No Drug Interactions".  OF COURSE it won't interact with anything, put you to sleep, or have any effect whatsoever.  It is, quite literally, a sugar pill and nothing else.

I put the box back on the shelf with no intention of wasting my money and went home.  When I got there I started digging a bit deeper, and I realised it gets even worse.  These tablets are available for sale on Amazon for the low price of $15.21 for 12 tablets in the US,  CDN$33.94 for 30 in Canada., or ￥1,731 for 30 in Japan.  Sadly, they are not available (on Amazon, at least) in UK, France, Australia, Germany, China, Austria, or Spain.  Yes you read that correctly - they are actually MORE expensive than actual cold medicines which actually DO have actual active ingredients (ie medicine) in them.

The absolute worst part is the comments people have written about the product:
It is extremely disheartening that there are so many people who have been duped into buying this garbage.  People's understanding of basic science has deteriorated to the point where too many people actually believe that a product like this has any chance of doing anything therapeutic.