"Shortcut" is one of my favourite oxymorons.  If you ask my wife, she will (correctly) inform you that most of the shortcuts I've found around our house actually take longer to drive than the main road.  Yet I continue to take the so-called shortcut because somehow in my mind they are better, though not necessarily faster, than the main roads.  Damn it, it just has to be better!

Doctors use lots of little written shortcuts and abbreviations when writing daily progress notes in patients' charts.  These notes are not only to document how the patient is doing, but also to communicate our thoughts with nurses, doctors, and other support personnel, so they are rather critical when it comes to patient care.  Like my back-road alternate routes, our shortcuts are designed to save time too, but unfortunately that isn't always the case.

As vital as they are, there is just one major problem with trying to read a doctor's note - they are indecipherable.  Sure, everyone has heard that old stereotype of doctors and their bad handwriting.  But as it turns out, there's a very good reason that stereotype exists - because it's completely true.  Our handwriting in general is absolutely atrocious.  So why do we do it?  Obviously it's to prevent lawyers from being able to read them.  There are actually courses in medical school to teach people to write so that it looks like we are holding the pen with our feet while standing on our hands with our eyes closed.  Ha ha, I kid.  Sort of.

No, the answer is much more mundane - it's simply to save time.  When I have to see 15 patients in the hospital, race to my office to see 10 more, then race back to the hospital to get to the operating theatre on time, every second counts, so I scribble notes as quickly as possible.

Unlike many of my colleagues, I do my best to make sure my handwriting is legible, and about 99% of the time I'm successful.  But most of my colleagues' notes are basically chicken scratch.  It would take the full capabilities of MI6, the CIA, ASIS, and Mossad to translate some of this indecipherable rubbish.  I sometimes can't figure out if my orthopaedic surgeon's note says he is going to "repair the tibia" or "replace the television".

Jamie (not her real name), who works in a pharmacy, emailed me a few days ago with this complaint:


"Why don't some doctors seem to see the importance of writing prescriptions in legible handwriting?  I've been interpreting them for years, but every once in a while you get one that's really bad.  This particular one had me stumped for a while.  Would love to hear your opinion on your blog!" 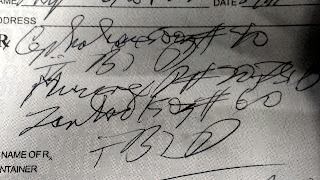 I'll admit I had to turn it upside down, mirror-imaged, translated into Greek, turned back upright again, and translated back into English before I had a clue what it said.  My guess was:

"Cephalexin 500 mg tablets, two tablets twice daily, #40 tablets.  Mucinex (alas, no dose!) twice daily, #20 tablets, and Zantac 150 mg tablets, one tablet twice daily, #60 tablets".  Somehow I got it completely right.  But it underscores a major problem - how are pharmacists supposed to fill prescriptions that they just can't read?  If there is a mistake (wrong medication, wrong dosage, etc), it's obviously the doctor's fault first.  But I can't help but hold the pharmacist partially responsible if this kind of bullshit doesn't prompt a nasty phone call to the offending doctor admonishing him for writing worse than a 2-year old holding a crayon with his entire fist.

Fortunately hospitals and pharmacies are cracking down on this more and more.  And as electronic medical records and electronic prescribing become more widespread, this sort of problem will eventually (hopefully) vanish.  Until then, I'll have to continue wondering what the hell

is supposed to mean.  I think it means either "the patient is doing well" or "meet me at 2PM for golf", but I may have to ask Jamie to translate it for me.