After 18 months of posting stupid stories and over 1 million page views, I've gotten a few dozen emails from readers (I hesitate to be so arrogant as to call you "fans").  Some people ask questions, some write to say thanks, some have sent stories of their own, and some have sent pictures.  But now that I think of it, I haven't gotten any hate mail.  Yet.

Maddie is a very brave 16 year old girl who has had scoliosis since she was 8.  Scoliosis is an abnormal curvature of the spine, and it can be crippling.  She tried a brace at first, but after three years that was ineffective and she had her first corrective surgery to fuse her spine when she was 14.  Her second was when she was 15.  After a few weeks at home, she started going back to school full time.  What impressed me the most about Maddie is that this brave girl didn't let her chronic pain stop her from playing lacrosse and softball and riding her horse.  How is it that children often endure serious medical problems better than adults?

Anyway, here is Maddie.  Before her surgery is above, after is below.  Good for you, Maddie. 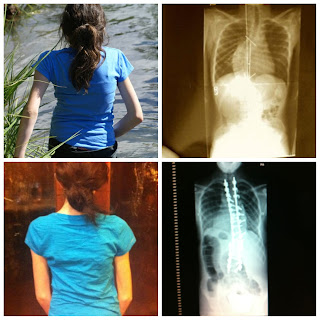 ---
Next is Van.  Van is one of the good guys - he wears his seatbelt and he gives his drunk buddies a ride home when needed.  On one such night, Van was run off the road by a large truck.  He went into a ditch, rolled his truck, and finally hit a tree.  Because he was wearing his seatbelt, he literally walked away from this horrific accident: 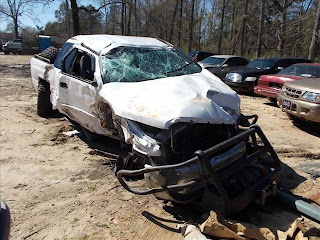 ---
This one is from RK who was driving a friend home when a drunk driver crossed the median and hit them head on, causing them to roll over 6 or 7 times.  RK suffered a broken pelvis, patella (kneecap), and wrist, while his friend walked away with a few scratches.  A huge congratulations to Chrysler for creating an SUV that can protect its occupants so well (notice all the airbags which deployed): 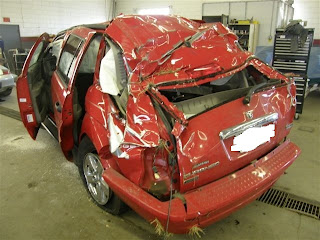 ---
This was sent by DS who suffered a dislocated pinky finger while playing football.  The injury ultimately required surgery, but it also caused him to miss his entire senior year of football.  However missing sports allowed him to focus on his studies and improve his grades which then allowed him to get into a good university.  There's a silver lining right there! 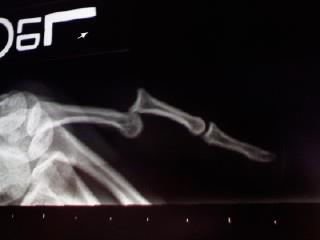 ---
And finally we have Mary (not her real name) who stepped on a knife one fine Australian morning.  I'm not exactly sure why she allowed herself to bleed all over her clean kitchen floor before putting some pressure on the wound or why she decided to take this picture.  Probably something to do with Facebook, Instagram, or Twitter.  Ugh. 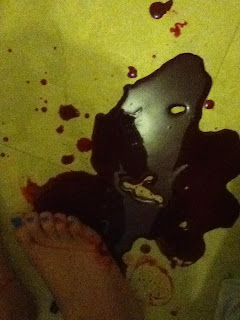