Pills and prescriptions are a funny thing.  Think about it: I give you a piece of paper with some indecipherable chicken-scratch on it, you present this paper to a pharmacist, and this poor pharmacist tries to decode my illegible handwriting.  Fifteen minutes later you are magically presented with a bottle full of some possibly-toxic chemical in pill, tablet, powder, capsule, caplet, or liquid form that will cure your ailment, whatever it may be, hopefully without causing diarrhoea, constipation, nausea, headache, insomnia, drowsiness, bleeding from the eyes, bubonic plague, cat scratch fever, malaria, insanity, or outright killing you.

Ok, so maybe "funny" wasn't exactly the right term.  "Incredibly dangerous" seems much more appropriate.  Most people, I'm sure, don't understand just how dangerous some of these medicines can be.

Consider, if you will, this silly little fairy tale.  Many years ago chemists were looking for a way to combat a very nasty rodent problem.  No, they didn't hire the Pied Piper.  Instead, they formulate a new kind of pesticide to kill rats and mice.  The idea is that the rodents eat so much of the poison, which turns out to be a very potent blood thinner, that they bleed to death internally.  Now since it was so effective at killing rodents, some genius later evidently thought, "Hey, this poison could also be used as a blood thinner in humans as a medicine!  BRILLIANT!" 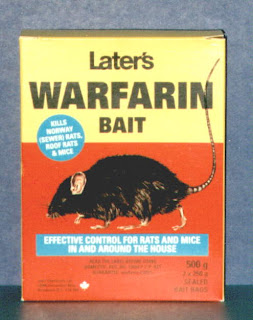 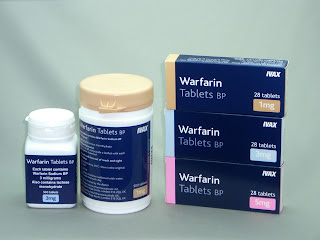 That's the very real rat poison on top and the just-as-real human medicine on the bottom.  Same stuff.  It's the EXACT SAME STUFF.  Still sound ridiculous?  Warfarin, one of the most commonly prescribed blood thinners in the world, is used to treat blood clots in humans.  And I've seen some people bleed to death from an accidental overdose.  In fact, the Federal Drug Administration in the US estimates that 15% of all major adverse effects are caused by warfarin alone.  Think about that for a second - if  you collect all the major side effects of all drugs on the market worldwide, 1 in 6 is due to this one drug.

Fortunately most other medicines (other than chemotherapy agents) weren't designed to be poisonous, but they still can have bad side effects.  People don't seem to think about that, though.  Did your doctor talk to you about the potential side effects of that medicine he just illegibly wrote for you?  Did your pharmacist talk to you about them as he handed the medicine bottle to you?  Shouldn't they have?

Did you bother to look up the drug online before you took the first one?  Shouldn't you?