There are a few things that scare the shit out of me when I see them on the road -
I always try to get as far away from these people as possible, because you simply can't devote enough attention to your surroundings when you're too busy fixing your makeup while txting your besty that omg dis song sux!!

There are some very impressive recent studies that have shown that driving while distracted is just as dangerous as driving while intoxicated.  If you text while driving, you are 23 times more likely to crash.  Almost 20% of all crashes which are severe enough to cause injuries are caused by distracted drivers.  At highway speeds, in the length of time it takes to read or write a text message, you travel over 100 m (that's the length of a football field), all while not looking at the road.

Just one of these distractions is enough to make your 2000kg missile loaded with explosive fuel dangerous enough.  Add more than one of them together, and you get what happened to Miss M (not her real name), a reader from Australia who wrote me an email about her experience in a car crash.  It's enough to make your head spin.


Hi Doc,
My name is Miss M {still not her real name}.  I'm 26 and I'm a nurse from {edited}, Australia and I read your blog constantly!!  Can I say being a nurse we need a lot more doctors like you around!!  I thought I'd share my story with you.  This happened to me last year.  In Australia when you have completed 120 hours of driving under the supervision of a full licence holder, you become eligible to drive without supervision but with speed limit restrictions of 90 kph {55 mph for our American friends}.  I was stopped to turn right when I heard a screeching noise.  I looked in my rear view mirror but didn't see anything.  Next thing I know, BAM!  I was hit from behind with such force that I was pushed into oncoming traffic where I was hit by another car.  All three cars were destroyed, but no one was killed.  I found out later that the driver who caused the accident was a 17 year old boy who was doing 110 kph in a 50 kph zone while texting.  And to add insult to injury, not once did he even say sorry to me or the other driver for what he did.  Teenagers these days think that they are invincible and that texting and driving is ok, but as you can see from these pictures, it's not.  He could have killed someone else if not himself.  He is now paying over $63,000 in fines and damages, he lost his licence for 3 years, and got charged with negligent driving, colliding with a stationary vehicle, and speeding.  The message needs to get out to young ones that it is not worth texting and driving.

Keep up the fantastic work, Doc! 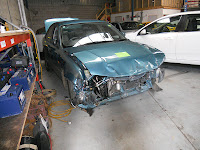 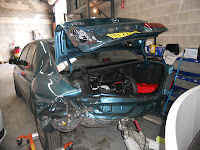 Over 200 billion text messages are sent each month, and I guarantee that 99.999% of them can wait until you've arrived at your destination to be sent.  If you're driving and you really really REALLY have to tell someone something, either pull over and send your message, or put down your goddamned phone and JUST WAIT UNTIL LATER.
at December 07, 2012