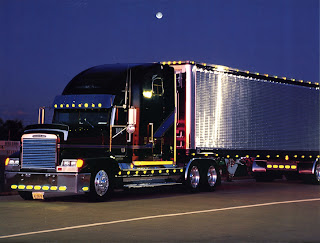 Whatever these things are called where you come from - tractor-trailer, semi, big rig, prime mover, Mack truck, lorry, artic - they are absolutely terrifying to be near on the road.  I will admit that most people who drive them are respectful of traffic laws and drive just fine, but every now and then I see one clearly being driven by a maniac that makes me wish I were on the other side of the planet, not just the other side of the road.

I was driving to the hospital yesterday morning and saw one pulled over to the side of the highway, two police cars (with their lights blazing) flanking it at either end.  The policemen were administering a roadside field sobriety test on the driver of the truck...at 9 in the morning.

Now let's all think about this for a minute.  One of two things was going on -
1) The driver was drunk, during rush hour, behind the wheel of a 45,000 kg (50 ton) weapon carrying up to 1000 liters (300 gallons) of explosive fuel and was putting everyone around him at grave risk, or
2) The guy was such a bad driver that it looked like he was drunk and was still putting everyone around him at risk.

Fortunately he was on the other side of the highway and hadn't killed anyone yet.  Yet.
at August 01, 2012