When I graduated from medical school, my father (who was also a general surgeon) told me to listen to the patient, because 80% of the time the patient will tell you the diagnosis.  They may not come right out and say, "Doc, I have appendicitis," but if you read between the lines, patients' stories often speak louder than any CT scan or blood test.  However, you usually have to listen very closely and always ask the right questions.

I was consulted on a 41 year old man with severe anemia and what looked like bleeding into his abdomen on CT scan.  He was a pretty healthy guy, he took no medications, and he had no prior surgeries.

The reason I was called is because 99% of the time intra-abdominal bleeding is due to trauma.  I asked the man if he had been in a car accident recently - no.  Had he been kicked or punched in the abdomen?  Nope.  Fallen on his side?  No again.

Bicycle accident?  Any violent coughing or sneezing fits?  Grizzly bear attack?  ANYTHING?  No, no, and no.  I obviously wasn't asking the right question.  Regardless, he was bleeding to death internally and needed surgery.  I took him to the operating theatre and removed his spleen that looked like this: 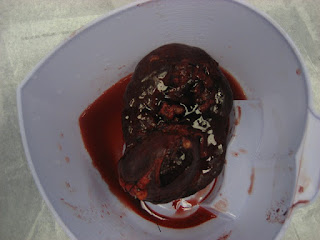 After surgery, I decided I had to do some investigating.  I had to know why this man's spleen popped.  He admitted to lightly "bumping" his abdomen against a concrete bird feeder earlier that morning as he was trying to move it, but a simple little bump shouldn't cause the spleen to burst.  Unless it was enlarged.  Enlarged...wait just a second!  I suddenly had a hunch.  Maybe I just hadn't asked the right questions yet...

This was no ordinary cold.  His monospot test confirmed that he had infectious mononucleosis, also called "mono".  Mono can cause the spleen to become quite enlarged, and his had enlarged so much that his little "bump" was enough to cause it to rupture.

His postoperative course was uneventful, and he went home a few days later.  "How did you figure that out?" he asked me just before he left.  I just smiled but didn't answer him - it just wasn't the right question.
Posted by DocBastard at 04:01