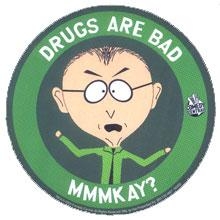 I don't think I can stress this enough.  Drugs make you crazy, stupid, and insane.  And they make you lie.

A patient of mine that I have been seeing for several weeks with an ulcer on her leg had herself admitted to the hospital because of severe pain in her leg.  She had admitted to me that she used to use crack cocaine and PCP, but she swore up and down that she was clean for several months.

I looked at her ulcer, and it was pristine.  There was no sign of infection, an MRI showed nothing except a superficial ulcer, and her labs were all normal...except for a urine drug screen which was positive for (dramatic pause) COCAINE AND PCP.

I love it when people try to claim that the test was a false positive or that there simply MUST have been a mix up in the lab.  The lab equipment doesn't lie, folks.  Why can't people just be honest with me?
at November 04, 2011