I'm in a fairly comfortable position in trauma surgery, in that I don't always have to be 1) certain or 2) correct.  That might not make a whole lot of sense on the surface, so let me explain.
I, on the other hand, only need to be pretty sure that there is something catastrophically wrong with someone's chest or abdomen before I slash him open.  If I wait until I'm 100% positive, I could risk serious consequences, like people dying and stuff.  Not only do I not require conclusive evidence, I could even be wrong and the patient may not need an operation at all.  But a trauma surgeon will never be criticised for performing an unnecessary laparotomy or thoracotomy.

Ok, that's not entirely true and I'm exaggerating slightly.  But only slightly.  I should clarify that as long as the surgery is indicated, the surgeon will never be considered wrong, even if there's nothing actually wrong.  After all I can't justify cutting open someone's abdomen if he's been shot in the foot, for example.  However, a patient who arrives in my trauma bay in profound shock and actively dying without an obvious source (ie blood pouring out of his neck) may be justifiably taken for immediate chest and/or abdominal surgery if there is a strong enough suspicion that there is something in one of those cavities that is causing imminent death.

Of course I need to do everything I can to ensure that the surgery is actually indicated, but sometimes there isn't time to verify.  And even if I'm wrong and the problem was elsewhere (sepsis unrelated to the car accident, for example), that is a risk I have to take in order to potentially save his life.  I don't have be completely 100% sure, I don't have to be right, I just have to be pretty damned sure.

I hope that makes sense now.

That being said, I love being sure, I hate being wrong, and I love being right.  And that was most definitely 100% the case with Trent (not his real name™).

I was in the middle of reading a scintillating article on the treatment of pancreatic cancer (ZZZZZZzzzzzzzzzzzzzzzzzzzZZZZZZZZ) when my pager alerted me to a level 1 stabbing victim arriving in 10 minutes.  I looked at my watch and nearly gasped - it was just after 2 PM.  Getting a stabbing victim in the middle of the day is a bit of a luxury.  Operating in the middle of the day rather than the dead of night?  It's almost like a vacation!  I casually tossed (read: aggressively threw) the fascinating (boring as hell) journal aside and ran down to the trauma bay, excited to get a serious trauma while the sun was shining.  Five minutes later I met Trent, though I can't really say that Trent met me, because he was nearly unconscious.  He was moaning and could barely open his eyes.

They had already disrobed him, and despite the cool weather, Trent was sweating profusely.  UH OH, my Inner Pessimist groaned.  A quick survey of both his front and back (never forget to look at the back!) informed me that the medics hit the nail right on the head - one solitary stab wound just to the right of the sternum (breast bone).  I whipped out my handy dandy, um, heart-listening doohicky thingy . . . you know, that thing that goes in your ears that surgeons rarely use . . . whatever.  Anyway, his heart was beating, but for such a young guy it didn't sound very loud.  His breath sounds were normal and equal on both sides, so I doubted he had a serious lung injury.  His heart, on the other hand . . .

A stab wound to this location can go pretty much anywhere and hit pretty much anything - right chest, left chest, abdomen, mediastinum (which contains the heart) - but I strongly suspected my Inner Pessimist (who was screaming "IT GOT HIS HEART, DUMBASS!  IT GOT HIS HEART!!" repeatedly) was right.  I just wanted to be sure before I slashed open his chest.  Or at least pretty damned sure.

While the radiology techs shot a chest X-ray (which was normal, no sign of a pneumothorax), I ran over to get my ultrasound machine.  A sonogram in trauma takes less than a minute and is designed to do one thing: detect fluid where it does not belong, either in the chest or in the abdomen.  I listened to my Inner Pessimist (who was still screaming something about the heart directly in my ear) and put the probe on his epigastrium just under his breastbone first, aiming up at his heart.  Despite doing trauma for {redacted} years, I have still seen very few positive trans-thoracic echocardiagrams, because these folks usually die before reaching me.  This study looked . . . hm, weirdly positive, I thought.  It looked like there was fluid within the pericardium, the sac that surrounds the heart.  In an elderly person with congestive heart failure this could be considered normal, but in a normal healthy young guy with a stab wound to the chest, it always means a hole in the heart.  Well, almost always.  Pretty much.  But having seen so few positive studies, I still wasn't 100% sure.

Knowing I didn't have to be 100% sure (but still wanting to be), I completed the sonogram of his abdomen (which took about 45 seconds) and saw no fluid around his liver, kidneys, spleen, or pelvis.  ("THE HEART!  THE HEART!").  Just to be the tiniest bit surer I went back up to his chest, and again there was that thin line of black (fluid) around his heart where only white (tissue) should be.

I was now absolutely positively at least 95% pretty sure that the knife had pierced at least the pericardium, if not the heart itself.  That was more than enough for me and Trent.

About 15 minutes later we were in the operating theatre, and on the way I explained to him that I was going to open his chest and repair his heart.  I am unsure if he heard most of what I said, and I'm even less sure that he understood any of it.  As he was put under anaesthesia, I did the one thing I had been wanting to do since he arrived: I put my finger into the stab wound.  Gently.  For me this is the most accurate method of demonstrating that a knife (or gunshot) wound penetrates into some cavity where it should not have been.  I felt my finger slide between two of his ribs (one of which had been fractured by the knife), and the tip of my finger nestled right onto something that was beating, moving rhythmically at exactly the same pace as the monitor was beeping.

Five minutes later his sternum was split in half.  I opened his pericardium, and there to greet me was a 2 cm laceration in his right ventricle. 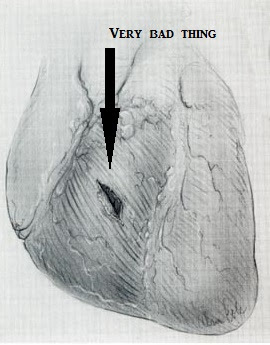 The key in this situation is to stop the bleeding.  Initially, this is very easy to do - I stuck my finger over the wound to plug it.  This allowed the anaesthesiologist time to catch up with resuscitating him, and it allowed the nurses time to get the supplies I needed to fix it definitively.  It only took about 15 minutes to suture the laceration, 5 minutes to look around the rest of the chest to confirm that there weren't any other injuries (there weren't), and about 30 minutes to close.  In all, it took about 75 minutes from the time he hit the trauma bay door until he was in the recovery room.

And only four days for him to walk out of the hospital.

Over those four days, unlike most of my patients Trent was extremely appreciative of our work to save his life.  He made every effort to say "Thank you", or "I really appreciate you", at every opportunity.  Trent even made it clear that he needed to shake my hand whenever I left the room.  I always make a conscious effort to treat all my patients equally no matter what, so while his appreciation did make taking care of him that much easier, I am absolutely positive that I did not treat him any differently than anyone else.