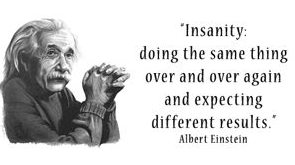 I don't know if Albert Einstein actually said that or not, but goddammit it's a good fucking quote.  And because Einstein is one of the most universally praised people in the history of mankind, I'm going to run with it, because maybe that will make me look better and smarter by association. 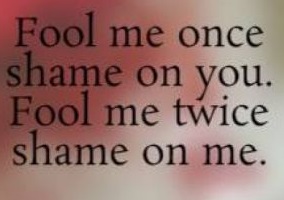 That one is attributed to Anthony Weldon in The Court and Character of King James all the way back in 1650, though some people seem to think it was coined by anti-abortion activist Randall Terry (who was only born in 1959).  Really, people?  The adage is centuries old!

Anyway, I can't really decide which one is more pertinent for this story, so I'll go with both of them.

"Whoa whoa, wait just one goddamned second.  What the fuck are you smoking?  You're going from Einstein to Anthony Weldon to your preference of pets?  Do you not understand segues??"

SIT DOWN AND SHUT UP.  It will make sense in a moment if you'd give me a chance, for fuck's sake.

As I was saying, I would have at least one cat (probably two) if Mrs. Bastard weren't horribly allergic.  And while I do like cats, I like Mrs. Bastard a hell of a lot more.  After all, unlike Mrs. Bastard, cats can't make lasagna (much to Garfield's dismay).

Lasagna aside, as much as I like cats I understand that they bite sometimes.  When they get scared or startled or just decide to act like an asshole, they can release their inner lion and pounce.  I wouldn't get rid of a cat just because it bit me once, but if it was a constant problem, the cat would go.  Fool me twice, etc etc.  Sorry Hypothetical Cat, but I like my intact epidermis more than any tiny adorable feline.

House cats are quite small, and while their bites hurt, I've never heard of anyone getting seriously mauled by a cat.  Dogs are another story altogether.  Dogs can do real damage with their teeth, as several of my patients (and their various savaged body parts) can attest.  If a pet dog bit me unprovoked, the dog would be evicted.  End of story.

Terrence's Wife (not her real name™) obviously had no such policy.

Terrence was in his late 60s and had suffered a series of strokes over the past decade, leaving him paralysed with no sensation on the right side of his body and essentially bed-bound.  He lived with his wife (who took care of him and cooked for him), and his Jack Russell terrier, who ate him.

Before I go on, read that last sentence back.  No, that was not a typo.

A few weeks back Terrence was brought to our hospital after his dog ate his toe.  Once again, in case you missed that little nugget, I'm going to say it again: The dog ate his toe.  When he was brought in, the great toe on his right foot was missing.  It was gone.  Just . . . gone.  The podiatrist tried his best to piece what remained back together, but dogs' mouths aren't known for being clean, and as expected the wound got infected.  After a lengthy stay in hospital, he was sent home on antibiotics.

And that's where we pick up Terrence's saga.

His wife woke up on this fateful morning and noticed something . . . odd.  She saw . . . wait wait wait, I can't say it any better than she did.  She said, and this is a direct quote without any paraphrasing whatsoever, "Well, he had toes when we went to bed last night!"

We looked at his foot, and the toes were gone.  All of them.  Gone.  GONE.  In case you don't believe me, here are Terrence's X-rays: 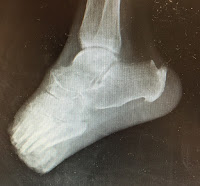 Notice anything missing?  On the off chance you aren't a radiologist, here is a normal foot.

See those little toe-shaped things on the end where toes should be that look just like toes?  Those are toes.

Terrence didn't have any.

When the medics first arrived on the scene, they had no idea what had happened to Terrence, nor did Terrence or his wife.  Somehow.  They were throwing around the idea that he had been attacked by an intruder.  Why they would believe that an intruder would break in, not steal anything, and then gnaw off his toes, I have no idea.  I wish I could have heard the conversation, but in my mind it went something like this:

That was the point in the conversation when the dog bounded into the room and vomited up the toes onto the floor.  Lest you think my creativity is getting the better of me, unlike the fabricated conversation above, I am not making this part up: the dog actually truly and veritably vomited Terrence's toes.

The same dog that had eaten his toe a few weeks before . . . spent the night eating the rest of them.  And then vomited them onto the floor.

I can only imagine the stunned silence in the room.

I called the same podiatrist back, and he once again tried to piece what was left of Terrence's foot back together.  All the king's horses and all the king's men, you know.

I'm sure the burning question in everyone's mind is: How quickly did they kill the cursed man-eating dog and get rid of its body?  Well, as of the last time I spoke to Terrence's wife, the dog was still alive and well and living at Terrence's house.  And eagerly awaiting his return, no doubt.  I mean, the poor dog must be hungry.  Am I right?  Hello?  Is this on?

So that leaves me with one final lingering question: What the hell do people say about "Fool me thrice"?
at September 12, 2016