Well, you asked for it.  I mentioned dead bowel (well, the smell of dead bowel, to be precise) in a previous post, and several commenters asked for the stinky story behind the stench.  I haven't yet told that story here for . . . well, the reason is . . . ok, if I'm mentioning the smell of a case, don't you think I'm trying to save you people here?  And you lunatics still want to know about it?  REALLY?

Seriously, you people are messed up in the head.  I'd seek professional help.  No, not from me, dammit.  I don't do crazy.  Fine, if that's the way you feel, then you're about to get what you deserve.  If you really must know then I have no choice but to preface this story with the following completely 100%  totally entirely invented probably illegal legal disclaimer:


I hereby disavow any and all responsibility for keyboards, monitors, iPhones, Galaxy S6s, iPads, Kindles, laptops, iMacs, netbooks, Chromebooks, and/or any and all other media readers that may be temporarily or permanently stained, made inoperable, and/or otherwise ruined by your vomit.

YOU HAVE NOW BEEN WARNED.  THERE WILL REAL PICTURES OF DEAD BOWEL.  Turn back now etc etc. 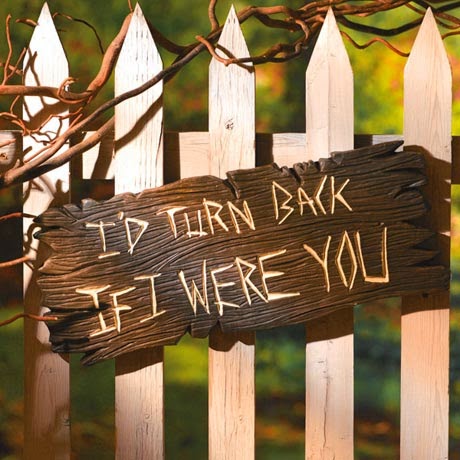 Good grief, you people are still here?  Ok, but remember - you asked for it.

I'm sure everyone has heard the phrase that bad things come in threes.  The logical people will naturally and logically argue, "That it isn't true, it's just that human brains seem to enjoy fitting things into patterns, so when bad things happen, we like to lump them in with other bad things that happened in close temporal proximity."  To those logical people, I'd simply like to say "Fuck you!  You obviously have NO idea how the Call Gods work."

A few years back Intensive Care Doctor (not her real name™) called me in a panic (N.b. when the people who devote their lives to caring for the sickest people are frantic, it's never a good sign).  She had an elderly, frail patient who had been battling a severe Clostridium difficile infection and was circling the drain despite treatment with several different antibiotics and immunoglobulin over the previous few days (these were the days before faecal transplants existed).  Nothing was working, she was about to die, and they wanted me to take out her colon as a measure of last resort.  She was so sick by that point that my two choices at this point were 1) do nothing and let her die, or 2) open her up, remove her entire colon, and then let her die.

Unfortunately her family wanted to give it the old college try, so as I opened her abdomen less than an hour later, the stench of death slapped me in the face like a drunk moron at a bar getting his due from that nice lady he won't stop bothering.  I removed her entire colon and performed an end ileostomy, but the damage to her system was done, and she was dead before I even got to the hospital the next morning.  I don't have a picture of her colon, so you'll just have to trust me that it wasn't just mostly dead, it was all dead.

WAIT JUST ONE DAMNED MINUTE!  YOU PROMISED PICTURES OF DEAD THINGS!  THERE ARE NO PICTURES YET, JUST A CARTOON OF AN OPERATION, ASSHOLE!

Oh just you wait, I'm getting there.

Number two came about a week later.  I got a call from Emergency Doctor (not his real name™) who had a patient who was actively dying.  He was in his 50s and came in complaining of severe abdominal pain associated with nausea and intractable vomiting for the past day.  When he described his abdomen as "rigid", my ears pricked up.  "Rigid" is a term used only for the worst-looking abdomens, ones that look as if they could burst a la Alien, and it makes general surgeons extraordinarily nervous.  It usually indicates that something catastrophic has happened in the abdomen, and that bad something will evolve into a fatal something if not addressed immediately.

I got the patient into the operating theatre about 45 minutes later, and upon opening his abdomen I found his entire small intestine dead. 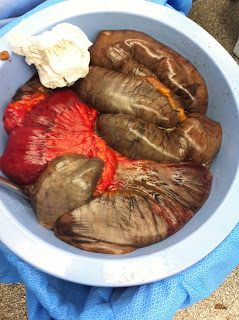 All that black-looking stuff is supposed to be pink-looking stuff.  The man had suffered from chronic mesenteric ischaemia, a condition where the blood supply to the intestine is compromised and results in severe, chronic abdominal pain after eating.  To treat this he had a stent placed into his superior mesenteric artery (which supplies blood to the small intestine), and as I was transecting that artery to remove the specimen I found (and removed) a large clot that had clogged the stent and the artery, killing his intestine: 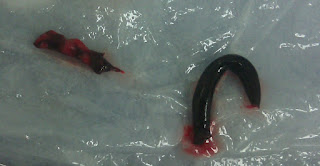 Since my necromancy skills are still poor, my only options were A) close up and let him die, or B) remove the entire small bowel, leaving him with short bowel syndrome (where you do not have enough surface area to absorb nutrients so you must depend on IV nutrition to live).  Since you've seen the specimen, obviously I went for option B.  Miraculously he survived, and about a year later I sent him to consult with a transplant surgeon about a bowel transplant (yes, those exist).

I thought I had had enough of dead bowels for some time, but the Call Gods (of course) had other plans: number 3.

Barely two weeks after I discharged the previous patient I got a call from a different Emergency Physician (still not his real name™) about a young man with an acute abdomen.  He was 35 and healthy, but his abdomen was rigid and his CT scan "looks funny".  I assumed he didn't mean "funny ha ha" but rather "funny oh shit please help".  But even I have to admit he was right - his scan did look funny - his small bowel looked thickened and sick.  All of it.

Again to the operating theatre, and again I found dead stuff . . . lots of it.  I once again had the choice of letting this young man die or attempting a huge and heroic surgery.  Based on the picture, you can safely assume you know which avenue I chose: 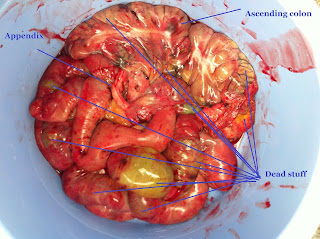 Perhaps it doesn't look as bad as the last one, but it was - there were patches of deadness along his entire small bowel up through and including his ascending colon (which you can see in the top portion of the picture).  But unlike the previous patient, the clot was in his superior mesenteric vein, not the artery.  This had caused progressive congestion of the intestine followed days later by organ death.  I again removed the entire small intestine, leaving the guy with an end jejunostomy and short bowel syndrome.  And again he miraculously survived.  Because the mesenteric vein is an extremely rare site for a blood clot I asked my haematology colleagues to investigate.  After he woke up and had his breathing tube removed several days later, he admitted that he had also had multiple clots in his leg veins in the past but never took his blood thinner.  After an exhaustive search we finally got a hit - Prothrombin 20210 mutation.  After I sent him home (on blood thinners) he was unfortunately lost to follow up, so I have no idea if he took his meds or if he is even alive.

So there you have it - my favourite dead bowel cases.  That isn't by any means all the dead bowel cases I have seen, but I still find it interesting that I had three so closely lumped together.  But with all that dramatic drama, I strongly suspect that the overwhelming response from the readers will be, "That's it, Doc??  SERIOUSLY?  THAT'S IT??  That wasn't so bad!  I want a refund!"  Maybe you're right.  Maybe I blew it way out of proportion.  Maybe it isn't quite as bad as I described it.