No offense, but if you ever hear anyone start a sentence with “With all due respect . . .” and expect what follows to be respectful, then you’re an idiot.  No offense.  It’s one of those phrases that is intended to deflect disrespect and immunise you from blame.  Whenever I hear it (or it’s bastard cousin “I don’t mean this in a bad way, but . . .”), I wish that the person would just be an adult and come out and say whatever offensive thing is on his mind rather than veiling it in a shroud of dismissal.

“Sorry not sorry” is similar - you are sort of apologising in advance, but at least when people use this one, they know in advance that you’re not really sorry.

So what the hell does any this have to do with Gerald (not his real name©)?  With all due respect, stop being so damned impatient and complaining so much.  You’ll just have to wait and see.  No offense.

Being on call for general surgery is usually mundane.  Since common things happen commonly, I can typically predict at least one or two patients with appendicitis, perhaps one with an infected gall bladder, maybe a bowel obstruction, or diverticulitis.  Pretty normal stuff, really.  Very seldom do I see anything really bizarre, but it does happen . . . hence, this blog.  Gerald (as you’ve probably guessed by now) falls firmly under the category of "bizarre".

When an emergency physician leads off with that, I am guaranteed to be presented with something odd, so I sit down and prepare myself for whatever hideousness is about to be dropped in my lap.  My brain cogs immediately started spinning as they usually do:  What kind of "thing"?  A bleeding thing?  An infected thing?  A needs-to-be-removed-from-his-rectum thing?  The emergency doc continued, and I must say I was more than a little disappointed that it wasn't a rectal foreign body.

“So this guy is 70 and healthy, no medical problems," he went on.  "But he came here because his co-workers were telling him that he was starting to smell like a rubbish bin.”

Well that was . . . unexpected.  The cogs spun a bit faster.

Bleedy?  What the . . . That's not even a real goddamned word!  The cogs spun yet faster.

The cogs flew off the machine.  Fucking greeeeaaaat.

I got to the hospital a short while later, and Gerald was sitting on his stretcher, smiling, chatting with his neighbour, and looking absolutely fine.  However, I could immediately see (and smell) why his co-workers had been concerned.  As I walked in an odour like death punched me in the face like walking into Ronda Rousey's fist (Ronda - call me).  The nurses were all wearing surgical masks, but the look on their faces told me that even that wasn’t nearly enough.  Having removed dead colons before (stories to come in the future, I promise), I’ve smelled worse, so it didn’t bother me quite as much.

“Hi, Doc!  How are you today?” Gerald greeted me with a big, warm smile.

Nauseated, I almost said.  I chatted with him for a few minutes, somehow resisting the urge to retch.  He told me that he was never sick a day in his life, took no medicine, had no allergies, and had never had surgery.  “I’m just a healthy guy.  I haven’t been to the doctor in 50 years!”

Considering the stench, that last part didn’t surprise me one bit.

He certainly didn’t look sick, but his fetid odour told me otherwise; healthy people don’t smell like a garbage dump.  When he removed his gown and turned around, what greeted me reminded me of this: 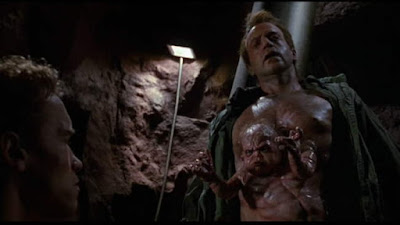 He had a mass on his back at least 20 cm in diameter.  It was cracked and bleeding in places, draining pus in other places, and it smelled like it belonged in a horror movie.  All around it were numerous smaller dark lesions, each around 1-2 cm.

Within the first 0.253 seconds of seeing it (I timed it), and even without a biopsy, I was 99% sure that this was a large melanoma and that all the smaller lesions around it were satellite lesions, signs that the melanoma was spreading.

Gerald was quite clearly not the perfect specimen of health he thought he was.

It took a bit of encouragement and convincing before Gerald actually believed that there was something seriously wrong with him.  I informed him that, assuming my suspicion was correct, he would need an extensive surgical resection followed by a large and difficult reconstruction, best done by a team of specialists at a university hospital.  Despite maximum efforts, it was still nearly a certified guarantee that his melanoma would kill him in the next few months.  “But Doc, I’ve always been healthy!” he kept arguing, somehow still in disbelief.

No, Gerald.  You haven't been healthy for many years.  You just didn't know it because you've been ignoring the fact that your body has been screaming at you for all this time.

Gerald inspired me to coin my own new phrase: Healthy not healthy.

See, I told you I’d get to the point.  Sorry for making you wait.