The trolling in the comments here has gone from 0-100 ever since The Troll (not his real name©) decided to flaunt his stupidity around here.  I've always enjoyed getting comments on my stories, but in the past few days it has become a burden.  I've had to delete more comments in the past week than in the previous 3 years combined.  I started moderating comments to weed out the particularly stupid ones (though still publishing the truly idiotic ones just for posterity), but the way blogspot's commenting system works, publishing or deleting comments is cumbersome and awkward, especially on my mobile.

I suspect most (if not all) of the trolling comments are coming from the same person, but some of the comments are downright ludicrous.  So I thought I would share in case you missed it.  This one is my favourite of the bunch, from the "Crazy" story (about the young girl whose mother would not let her get a CT scan): 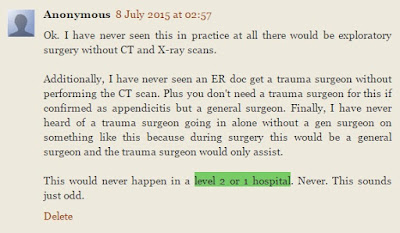 This seems to be the same The Troll who claims to be a former general surgeon and currently a lawyer.  See the "level 2 or 1 hospital" verbiage, and compare it to this comment posted about 90 minutes before on the Easy Call Day? story: 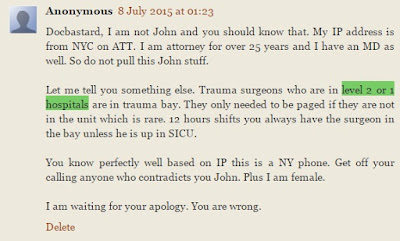 Obviously The Troll doesn't know a thing about surgery, or else he (or she, since this person insists she is not a he) would know that no X-ray, CT scan, MRI, ultrasound, or any other supporting test is necessary to take a patient to surgery.  They can sure be helpful and they are often ordered by emergency physicians before they even call us, but they are not mandatory in any way, shape, or form.  Strange - I would think a former general surgeon would know that. 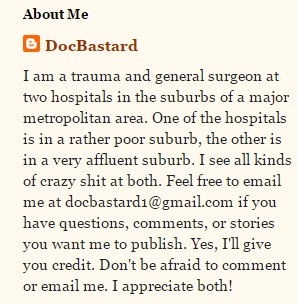 Oopsie.  I hope he feels appropriately stupid.  Because he sure looks stupid to me.

Now I will apologise to the loyal readers and loyal commenters not only for boring you with this tedious dreck, but also for requiring your comments to be approved before they are published.  This is the only way to keep The Troll away.  I have prided myself on keeping the comments wide open since I started this stupid little blog, but The Troll has necessitated this.  I will do my best to approve your comments quickly, and I will also do my best to keep The Troll off the comments.

Unfortunately that means I will have to read through all of them and try to determine which are his and which are not.  It also means that I may accidentally delete some comments that are not his.  I will apologise in advance.  To prevent this from happening, I'd encourage anyone who has been commenting anonymously to take a few seconds and create a profile.  Hopefully The Troll will slink back to his cave sooner rather than later, and this will all soon be but a happy memory.

Now that that's over, we now return you to your regularly scheduled stupid patient stories.  Yes, they're coming back, and soon.  I have a whole slew of them lined up.  The idiots have been out in droves lately.
at July 08, 2015