Stupid doctors.  Stupid lawyers.  Stupid patients.  Stupid paramedics.  Stupid nurses.  Stupid me.  There aren't many people I haven't appropriately abused here, but unfortunately there is one group that has been badly overlooked.  That, however, is about to change.

If you think doctors and nurses run hospitals, you'd be sadly mistaken; we have almost no input into the day-to-day workings of the hospital.  Those details are left up to businessmen and businesswomen who supposedly know how these massive undertakings are supposed to work so that the people who actually treat patients can do their jobs.  That said, having been in this business for several decades, I've seen exactly ZERO hospitals that I could say are well-run.  Well, I could say it, but I would be lying my ass off.

Why, you ask?  Well sit back and let me tell you a tale of woe.

Other than my family, one of my few pleasures in life is sitting down and enjoying an ice-cold Coca Cola.  Although I know there are better options (YES I FUCKING KNOW COKE IS BAD FOR ME), every now and then I still treat myself.  There's nothing quite so satisfying as the sharp, cold bubbles tickling my tongue as the phosphoric acid erodes my tooth enamel and guarantees me a retirement of dentures.  Yes, I've tried the lite/diet options, to no avail.  Sure there's less sugar, but the artificial sweeteners leave a noxious (almost metallic) aftertaste in my mouth that completely defeats the purpose.

As an aside, I can't stand purposeful misspellings like "lite".  And if "lite" isn't bad enough, "Xtreme" and "kwik" make me irritated enough to want to kick a hole in the wall.  I find these intentional misspellings as disagreeable as the aspartame aftertaste and almost as awful as Iggy Azalea's "music".

As I was saying, fortunately both of my hospitals have Coke in their respective doctors' lounges.  Every so often I will indulge, though somehow drinking an artificially-coloured carbonated drink makes me feel guilty, like I'm breaking the law.

Now I don't know exactly what's going on in my two hospital, but though they are miles/kilometers apart and share no hospital administrators in common, they seem to be engaged in a vast anti-soda (and thus an anti-Doc) conspiracy.

As I was enjoying a rare Coke between treating idiots trauma patients several months ago, one of my colleagues approached me and laughed, "You better enjoy that while you can, Doc (not your real name©)."

"Why?  Are they getting rid of it?" I asked jokingly.

"Oh, didn't you hear?", he replied.  "They are doing away with the sugary drinks and replacing them with flavoured water."

I checked into it, and indeed, apparently in an effort to make the staff healthier, the hospital administrators thought it would be a wonderful idea to get rid of all the regular soda.  For all intents and purposes they are telling us doctors, who are all grown adults last I checked, what we can (and more to the point can't) drink.  And somehow they feel that flavoured water (with various artificial sweeteners like sucralose) would be a better option for us.

I sat there silently fuming and mourning at the same time while finishing what likely would be one of my last Cokes ever at that hospital.  Then I realised I was acting like a spoiled brat, so I put on my big boy underpants and made my way to my other hospital to make rounds.  Still fuming.

Oh, and before anyone mentions it, yes I realise this falls directly under the category of "First World Problems", but I think working 100 hours a week entitles me to a free soda every now and then.  So shut it.

Anyway, where was I?  Oh right, on my way to Hospital #2.  When I got there, I decided to spite the first hospital's administrators by having a second soda.  Ha!  Two in one day!  Take that, assholes!

I went directly to the doctor's lounge and walked straight to the refrigerator, seeking my spoils.  And what greeted me was . . . this:

It was a tiny can of Coke.  A tiny can!  What the fucking fuck?  And as small as it actually was (about 2/3 the size of a normal can), what my mind saw was this: 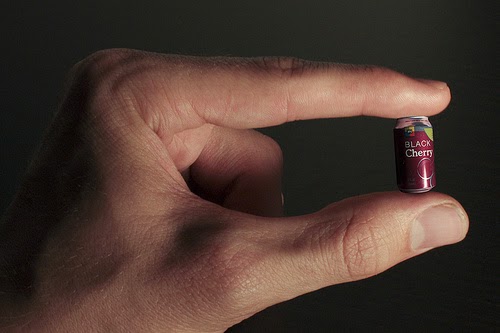 I didn't even know this crap existed!  It's just like Coke, only . . . less!  Who the hell buys this?  And why?  Who wants less of something?

My ire arose once again, but this time I didn't let it get the better of me.  I fumed again for a brief moment as I considered my worsening First World Problem, and then I came up with a perfect solution.

I drank two of them.