I know in my last post I promised a stupid story about me, but this takes precedence.  The post about me is written, but it will have to wait.  I've done stories about stupid patients, stupid doctors, and stupid lawyers, but never about a stupid celebrity.  Yesterday the opportunity presented itself, and I would be an idiot not to pounce on it.  This time the idiot is not me, it is a 19-year old self-absorbed, egotistical, narcissistic little twit named Justin Bieber.

It's for one simple reason: because Justin is an idiot who thought it was ok to drink alcohol (apparently his blood alcohol level was below the legal limit, even for a minor), smoke weed, pop some prescription pills, have a few buddies block off a street in Miami, rent a Lamborghini and a Ferrari, and drag race at 4AM going double the speed limit.  Fortunately no one was hurt.  Even more fortunate was that he got caught.

This stupid story is stupid on many levels, like Stupidception.  Sure he drove after drinking alcohol, but that's not the worst part.  And sure he acted like an entitled ass when he got pulled over ("What the fuck did I do?  Why did you stop me?" he moronically said), but that's not even the worst part.  No, the worst part is that Justin has millions of rabid fans thinking that what he did yesterday is forgivable and just a simple mistake.  A quick check of social media finds this minuscule sampling of how his fans see this (these are actual, unedited quotes):

Maybe Justin should stop listening to his delusional fans for one minute (seriously girls, he is NOT your boyfriend) and talk to Bob.

I met Bob (not his real name) just after midnight some time ago after what he described as a typical night - getting home from work and getting shitfaced at the bar.  Most nights he had his buddy drive him home, but this night that buddy had stayed home sick.  It was a short drive, so Bob decided to drive himself.  He'd never had any problems getting home from the bar.  Until now.

The driver of the other car came around a corner only to see Bob's headlights speeding towards her in her lane.  Her 8-year old daughter was asleep in the back seat, and she didn't even wake up as her mother tried to swerve but didn't have time.  Both cars were obliterated.

Wendy (not her real name) and Bob were both brought to me at the same time in separate ambulances.  Bob had been too drunk to put on his seatbelt, and his face went straight into the windscreen.  He was awake and talking, however.  Very intoxicated, but talking.

Wendy was not.  Her head took the brunt of the impact, and she was barely conscious when she arrived, her head injury obvious and massive.  I ran back and forth between the two trauma bays, barking orders, tending to both, trying to determine in the first few seconds who was injured worse.  I got my answer 5 minutes later when Wendy's heart stopped.  We started CPR, but despite exhaustive measures we could not get it restarted.  I pronounced her dead about 30 minutes after she arrived.  I found out later that night that her daughter, who had been taken to the local children's hospital, had died at almost the same time.

Bob ended up having a LeFort III fracture of his face - the bones of his midface were basically all shattered and dissociated from the rest of his skull- but no other serious injuries.  I went to see him the next morning, and he had no recollection of the night before.  I explained that he would need extensive reconstructive surgery by a highly-specialised plastic surgeon to put his face back together.  When I asked if he had any questions, he had only one:

"Was anyone else hurt?"

I nodded.  His shoulders dropped and his badly-swollen eyes widened.

I struggled internally between anger over what he had done (imagining how I'd feel if it had been my wife and daughter he had killed instead of Wendy and hers) and feeling sorry for him for what he was about to hear.  Knowing he had to hear the truth, I gave it to him, honestly and fully.

He sank to the bed and cried openly.  I paused but had nothing else to say that would change anything, so I left without saying another word.  It was clear that Bob would punish himself worse than my words, or any judge and jury, ever could.

Bob left the hospital a few days later, his face still swollen but fully reconstructed.  For the rest of his life Bob will have to look in the mirror and see the scars on his face.  Those scars will be a daily reminder of how just one simple, little mistake can profoundly change your life, and the lives of everyone around you, forever.

When Mr. Bieber was released from jail after posting bail an hour after he got there, he had a perfect opportunity to change many lives for the better by choosing to do the right thing.  All it would have taken to make a huge difference was to stop outside the jail, apologise for his stupidity, recklessness, and carelessness, speak out vehemently against impaired driving, and show his millions of young, impressionable fans around the world that what he did was wrong.  Instead, he decided to do what any reasonably responsible citizen would do - pause, preen, and pose for pictures while perched atop his handler's Cadillac Escalade (in leather pants, no less). 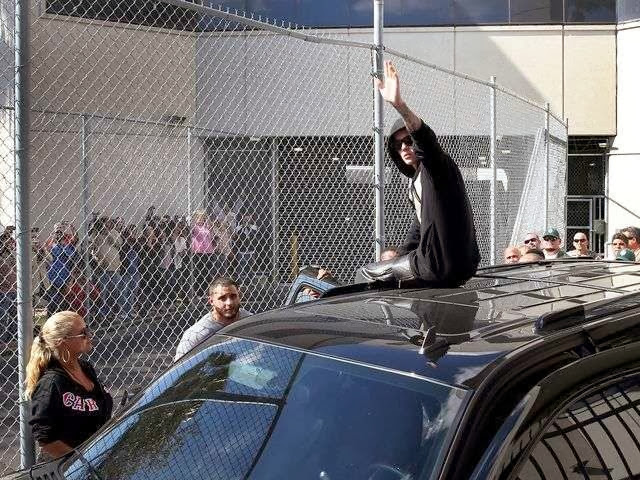 He simply waved to his screaming horde of fans for a moment and left.  His window of opportunity is closing fast, but he still has a chance to try to make amends.

But I strongly suspect he won't.  And that makes me very, very angry.  It is moments like these, moments that should be humbling, that show the world your true character, and he has done that.  Now you know why I have no respect for this kid - because he has no respect for himself, his community, or his fans.
at January 24, 2014