1. steady persistence in a course of action, a purpose, a state, etc., especially in spite of difficulties, obstacles, or discouragement.

Wait...damn, I'm getting way ahead of myself again.

This next story comes from Miss C (not her real name).  And prepare yourself for some gory pictures...ok, they aren't really gory, but they are a bit graphic.  Now that I've set it up, here goes:

Hi Doc.  From reading your blog you seem like a really great caring doctor. We need more doctors like you. I've had my fair share of being in hospitals...not for me but for my mother.

My mother was in a horrible accident 7 years ago when I was 12. After a family wedding, my mother was walking to our car and a drunk driver pulled out behind her, pinning her between the cars. It was a hit and run - the bastard just left. The muffler of the car gave her a third degree burn and the bumper of the car shattered her fibula and tibia.  The ambulance came for her and took her to a local hospital.  We arrived at 1:00 am, and we waited in the ER for 12 hours to see a doctor!  Can you believe that?  The orthopaedic surgeon's explanation was that he went out that night and had a few drinks and couldn't do surgery or come in at all.  And there were no other doctors.

When the doctor finally saw her, he told us she needed surgery immediately.  When the doctor was finished with the surgery, there was almost nothing left.  He put a titanium rod in her leg, but the tibia and fibula were protruding out of her leg along with muscle.  The next day, the surgeon came in the room without any compassion and said to my mother, "We're going to have to amputate your leg; you're never going to walk again."

My mother was in shock and in disbelief and asked why.  He replied that he didn't think the bone was going to grow around the titanium rod.  My mother asked why he put the rod in if she was diabetic.  He angrily said, "YOU'RE DIABETIC!? No one told me!"  He grabbed the chart and said, "Either way, it's not going to work out, so we're going to have to amputate."

My mother refused to believe that she wasn't going to walk again, so she refused the surgery and we took my mother home while my father was looking for another hospital.  My sister and I cared for her for weeks.  After two months my father finally found a hospital that specialised in bones.

We were told she needed surgery immediately.  The first surgery was to take out the titanium rod, shave off the broken bone that was infected, clean out the infection, and place an external fixator {external hardware that holds the fractured bone in place}.  They did many cleaning surgeries before another major surgery.

They then did a muscle flap {taking muscle from her calf muscle and flipping around to the front of the leg to cover the bone} and two skin graphs.  After four months, several surgeries, and more antibiotics than I can count, she finally went home.

Six years and 10 surgeries later, my mother walks.  So much for never being able to walk right?

Well Doc, I thank you for being such a great doctor.  I truly appreciate doctors who take their time to get to know their patients and not just try to get rid of them. 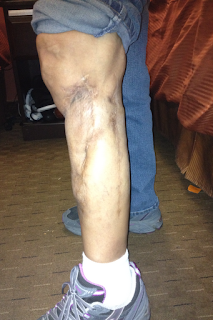 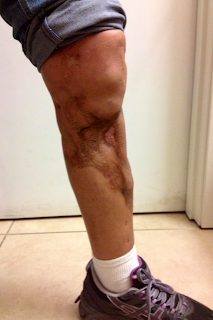 You'll notice the horrendous scarring on her leg.  You'll also notice HER LEG, which is still firmly attached to her body.

I give absolutely no excuse for the first surgeon, but I give full credit to Miss C's mother (not her real name) for her almost-ridiculous perseverance in the face of a near-catastrophe.  It's people like this who refuse to give up who make my job worthwhile.
at November 06, 2012