In case people still aren't convinced by the stories I've told about seatbelts, I got an email from a reader a few days ago with a story of her own.  (Coincidentally, my last seatbelt post was exactly a year ago today.  Strange.)  Miss X (not her real name) not only gave me permission to post her story, but she asked if I would share it.

To protect her identity, some names and details have been changed.

A few days ago I found a tree at 40mph on a back country road and I have always worn my seat belt but I had never been saved by one.


My friend (whose truck it was) had pulled over because she was crying about unrelated marital issues, so I took over driving and was trying to turn around to go home for ice cream and a chick night.  Instead, the Chevy Silverado hit the tree head on.  I had never driven the truck before and it was dark and raining on the curvy back country road.  I broke the metal pedal on impact.  We were three inches from being legless and five inches from being crushed.  My chest broke the steering wheel off and pushed the steering column down three inches.   I broke my 3rd, 4th and 5th metacarpals in my right hand when the impact caused me to punch the radio.  My friend did the same, but she spiral fractured her left middle finger.  So we have matching purple casts on opposite hands.  We joke that we fist bumped mid impact.  My ribs are sore and my back muscles are not happy but because of our seat belts we walked away from what should have been a fatal accident with a collective four broken bones in our hands, sore ribs, minor airbag burns, and deep seat belt bruising.  Without our seat belts we would have been thrown headlong into a tree and possibly died on impact.  With them we both walked away with relatively minor injuries.

In the pictures, the big dent in the side of the truck shows that when we impacted there was enough force to wrench the truck bed back two inches, and it also dropped the spare tire from under the bed.  If you look below the buttons on the steering wheel you can see how I broke it.  The tire in the picture is at an odd angle because the front axle was cut in half by the transmission being forced into the manifold by the engine.  The X-ray is my hand.  It was actually scarier to see the truck afterwards than the actual accident was.

Thank you for being a wonderful person and doctor.  The world needs more people like you.


In addition to the story, she also sent me several pictures.  Here is what remains of the front of the truck: 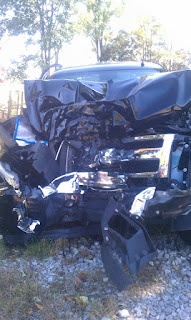 Here is the broken steering wheel: 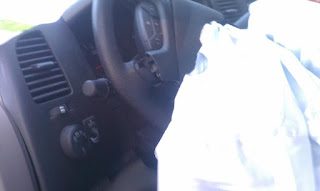 And this, of course, is her hand with the three broken bones. 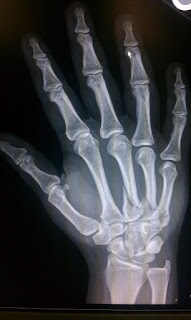 This is the sort of accident where you could say, "It could have been worse."  You could try to argue that she was just lucky.  No - I prefer to think of her as smart for using the very device that was designed to save her life.