I may be going soft, because I just can't bring myself to call these next two boys stupid.  I think they're just too young and innocent to know that what they were doing was unbelievably stupid, reckless, and dangerous.

Last night while his parents were out of town, a 16-year old kid helped himself to the family car.  He picked up his 15-year old pal, and the two went joyriding.  Well, they went joyriding after helping themselves to some of their parents' liquor.

Dumb?  Yes.  But what's even dumber is not having enough driving experience to be able to handle the older car, losing control, and driving it off the road and into a tree.

Fortunately, neither of the kids was seriously hurt.  But if you've read this blog at all, you know I'm not done yet.  Of course it gets worse!

After the crash, the boys got out and walked around, no doubt assessing the damage to the car to see how much damage there would be to their asses when their parents got home.  I can only assume the driver considered wearing shoes while walking on broken glass optional, because he told me he felt like he had broken glass in his foot when he tried to walk.  I took a look and indeed he had a tiny laceration on the sole of his foot.  I ordered an X-ray to confirm - you don't have to be a radiologist to see the problem here: 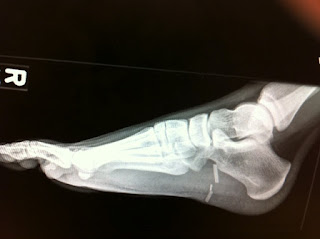 Those rectangular things sitting in the soft tissue of the sole of his foot are not one, not two, but three shards of glass measuring up to 1.7cm in length.  I injected his foot with numbing medication, lengthened the incision a few millimeters, and fished out all three pieces of glass.  Here's his X-ray afterwards: 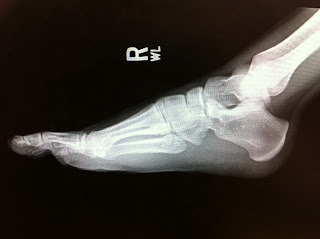 Aah, much better.  It's a good thing teenagers are indestructible, right?
at July 07, 2012