I've said several times before that surprises in my line of work are bad.  I can think of only a handful of cases where I've been in the middle of an operation and said, "Hot damn!  That sure looks good!"  I had a case exactly like that just recently (which I will be writing about in a week or two), but cases like those are few and far between.

But surprises, even bad ones, can still be fun.  One of the fun things about trauma surgery is that I often don't know what I'm getting into as I'm getting into it.  A bullet that enters the abdomen, for example, can hit literally any organ (knife wounds are not typically as severe), so I may be repairing the stomach, resecting a portion of intestine, removing the spleen, and suturing the liver all at the same time (sort of).  Before I begin each Trauma Mystery Case I always try to guess what the injuries will be, but I am usually woefully incorrect and tend to under- or overestimate dramatically.

But I'm also a general surgeon, and general surgery is more predictable.  Even in difficult cases, like perforated diverticulitis or a perforated gastric ulcer, I usually have a pretty good indication about what I'm going to have to do.  It is rare that I have no idea what's going on before I make my incision, so general surgery surprises, both intra-operative or post-operative, are much rarer.

That said, Isadore (not her real name™) surprised the hell out of me recently.  Not once, not twice, but thrice.

When the emergency physician called me and asked me to see Isadore urgently, I must have let out an audible groan, because I heard a soft chuckle on the other end of the line.  "I know, I'm sorry," she said.  "But hey, at least she's pretty healthy!"

With all due respect to all the nonagenarians out there, there is no such thing as a healthy 93-year-old woman.

Ninety three-year-old Isadore had come in due to exquisite pain in her right groin for the past day or so, and it was associated with multiple episodes of nausea and vomiting.  The emergency doc described her symptoms and medical history over the phone and told me that she had already ordered a CT scan of Isadore's abdomen, but I didn't even need to see it or hear the results to have a really strong suspicion what was going on.  That pattern is most consistent with an incarcerated femoral hernia with obstruction. 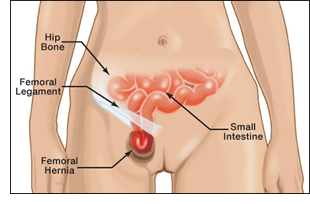 Essentially a loop of intestine gets caught in the femoral canal, a very small space in the groin where the femoral artery, vein, and nerve penetrate from the pelvis into the thigh.  Femoral hernias are much more common in women, especially older women, and they can be surgical emergencies if the blood supply to the entrapped intestine gets cut off, causing that loop of intestine to die.

"So the CT scan shows small bowel obstruction due to a right groin hernia, but no sign of dead bowel" the emergency doc concluded.  I didn't tell her that I already knew that, because believe it or not I don't enjoy acting like a know-it-all fuckwit that often.

I arrived a few minutes later and looked at Isadore's CT scan and blood work before going to see her.  Fortunately the scan did not show any indication that her intestine had been compromised.  Her lab work was all stone cold normal, and while there was definitely a loop of small intestine in her right groin where it did not belong that was causing an obstruction, that loop did not appear thickened (which indicates inflammation), and there was no fluid around it (which can indicate vascular compromise).  Hopefully I could simply push the intestine back where it belonged, relieve the obstruction, and send her home the next day.

And as I walked into Isadore's room, she looked exactly as I expected a 93-year-old woman to look: like a 93-year-old woman.  Her sparse white hair was sticking out of her wrinkled head at angles I didn't even know existed, her skin was hanging from her hands like tinsel on a department store Christmas tree, and I think her entire facial complexion was one huge age spot.

Sigh.  This was clearly not someone I wanted in my operating theatre tonight.  Or ever, for that matter.  Surgeons do not relish the idea of operating on someone that would even make Methuselah think "Wow, she's freaking OLD".

On my initial evaluation, her abdomen was not tender at all, but there was a distinct bulge in her right groin that was quite painful.  I tried pushing on it gently to get it to reduce back into the abdomen, but it wouldn't budge.  Even after I gave her some IV sedation, the damned bowel just would not reduce.

My Inner Pessimist tried thinking of some excuse for me not to take her to surgery immediately, but I was able to beat him back.  I reluctantly told her and her son (who was himself an old old person) that she needed immediate surgery, and I even more reluctantly called the operating theatre to ask them to ready a room for me.  About an hour later I made my incision just above her groin crease, dissected down to the hernia sac, and cleared it of overlying tissue.  As I suspected it was indeed an incarcerated femoral hernia.  But when I opened it, I got my first shock from Isadore:
The neck of the hernia was so small and so tight, it had completely cut off the blood supply to this very small (perhaps 3 cm-long) segment of small intestine.  Her incarcerated femoral hernia was actually a strangulated femoral hernia.

What the fuck?  Dead bowel?  How the hell was that even possible?  Her blood work showed no indication of that, nor did her scan!  But whatever the case, thank god I hadn't been able to reduce the hernia.

My hernia repair had just gotten about 10x more difficult, and 100x riskier.  Instead of just pushing her bowel back into her abdomen and repairing the hernia, I now had to remove the dead portion of intestine and then repair the hernia.  After opening up the hernia defect just a bit, I was able to get a bit of normal intestine through the hole.  I transected the bowel on either side of the dead portion and put the two ends back together.
I then repaired the hernia using only her 93-year-old tissue.  Small bowel resections like these are fairly routine, but nothing can be considered routine in a patient this old, especially with dead bowel.  As soon as I was done I informed her son that my part of the procedure was done, and the rest was up to her.  I never can predict how extremely elderly people will react to surgery and anaesthesia.  Some folks just never seem to recover, and they dwindle, usually rather quickly.

My next shock from Isadore came the next morning when I was doing my morning rounds.  I checked Isadore's vital signs and found them completely normal.  I then went to check on her, and found her to look just as completely normal.  She had no pain whatsoever, she was hungry, and she had walked overnight several times to the restroom.  In short she looked better than the vast majority of my patients one fifth her age.

The following day Isadore continued her recovery, and on the morning of the 3rd postoperative day she was passing bowel movements and eating regular food, and I sent her home without her having taken a single pain pill during her entire hospitalisation.

My third and final shock from Isadore was two weeks later in my office for her follow-up appointment: she still looked like a peach.  After her lightning-quick hospitalisation I suppose I shouldn't have been surprised at all.  I could barely see my incision (if I do say so myself), she was still pain-free, bulge-free, and complaint free.  It was like the entire event had never even happened.  I think I was more scarred by the experience than she was.

Though the course of this case went essentially as perfectly as I could have possibly hoped, one thing it will not do is make me any less nervous the next time I have to operate on someone who is nearly old enough to remember World War I.  Staying nervous helps keep my honest, keeps me on my toes, and keeps me humble.  Complacency leads directly to mistakes.

But it just goes to show that in my line of work, not all surprises are necessarily bad ones.
at December 12, 2016