I am not a lawyer, nor do I claim any specific expertise in any field having to do with law. But I do know what the word "dismissed" means, and I do know what the phrase "with prejudice" means, so when I saw these words in a Request for Dismissal, written by Bruce Brusavich (who happens to be the lawyer representing Jahi McMath's mother Nailah Winkfield), and submitted to Alameda County Superior Court on September 7, 2018, my eyes got a bit wide.

In case you aren't quite following, it appears that the Jahi McMath saga may finally finally FINALLY be over. Professor Thaddeus Pope posted this document to his website: 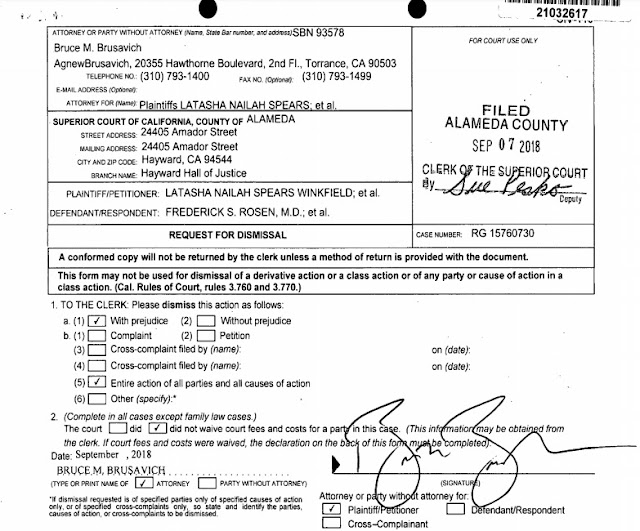 Again, I claim no expertise in law, but this certainly appears to me to be a request by Nailah Winkfield to dismiss all complaints against Dr. Rosen with prejudice. This means case closed, never to be reopened, etc.

If that is in fact true, I have no doubt that the two sides reached a settlement, which I (and everyone else) have predicted from the very beginning. I am also not surprised that there has been no media coverage of this whatsoever. I am also not the least bit surprised that no autopsy results have been produced, as I highly suspect Ms. Winkfield would never have let an autopsy happen. As the world learned with Terry Shiavo, autopsy results can refute family members' claims better and more soundly than any expert.

If any lawyers happen to come around, I would appreciate some verification on this. But to my untrained and extremely amateur eyes, it appears the Jahi ordeal is finally, actually, really, and in all other ways over.

A tale of two patients

It's been over two months since I wrote anything, which is by far the longest interregnum I've ever taken.  And by "interregnum" I mean "I've been too goddamned lazy and/or distracted to sit down at my computer and get some writing done".  Sure, I've seen many blog-worthy patients in the past 8 weeks, but I've just had some trouble framing them into what I thought would be an interesting story.

I'd like to present a pair of patients whom I admitted on the same date just a few hours apart.  Both were seriously injured and both spent considerable time with me recovering.  But I found the differences between the two rather startling.  So for this post I've decided to do something a little bit different and see who can spot the differences.

Patient 1: Ivan (not his real name™) was the victim of a hit-and-run pedestrian accident.  He was walking home from work when a car struck him at high velocity.  He suffered a complex fracture of his left tibial plateau, a right humerus fracture, an open right ankle fracture, several broken ribs, and a ruptured urinary bladder.  I performed an exploratory laparotomy and repair of his bladder laceration, and an orthopædic surgeon performed a surgery for his humerus, two surgeries for his right ankle, and 3 surgeries for his left knee (so far).  He had an external fixator on his left knee for several weeks while his œdema improved before his final two surgeries, he had an uncomfortable urinary catheter in his penis for several weeks while his bladder healed, and he was unable to bear any weight on his right (dominant) arm and both legs for 2 months.  In short: he was broken.

Patient 2: Tera (not her real name™) was driving her car down a dark road at night with a blood alcohol level over twice the legal limit when she went off the road and struck a tree.  In the process she fractured her left acetabulum (the socket of the hip) and a bone in her right hand.  She required one surgery on her left hip and was unable to bear weight on her left leg for 6 weeks (no surgery was required for the right hand).  In short: she was mostly fine.

Every day that I went to see Ivan, he was kind, respectful, and polite despite his multiple injuries and significant pain.  "Thank you, doctor" was his closing statement each morning as I walked out of his room.  Even though I had cut him open and inserted a large, uncomfortable tube into his penis, he thanked me.

Anyone see the difference yet?

I sure did.  As I walked from one room to the other day after day, the difference in their attitudes astounded me.

Tera (who you will remember caused her own injuries by driving drunk) did nothing but complain.  She even refused physical therapy on multiple successive days because of pain despite the fact that it was the only thing keeping her in hospital.  I wanted to suggest to her nicely (read: scream in her face) that she had a team of people whose entire job was to take care of her so she could try showing some basic gratitude, but I didn't.  No, I just listened.  Standing there and listening to her many grievances was a far, far better thing that I did than I had ever done.  And yet she never once said "Thank you".  She showed no appreciation or gratitude at any time before I finally was able to send her to rehab.

Ivan, on the other hand, who was much more severely injured through no fault of his own, who was completely unable to walk, who had a catheter hanging out of his penis, who had three broken limbs, and who had a huge incision on his abdomen, was still able to smile and cooperate and participate with his own care.  No matter what was asked of him, no matter how much pain he was in, Ivan simply gave a weak smile, said "Ok", and then did it (or at least tried).

Look, I understand that no one wants to be in the hospital.  My patients are in pain and I'm asking them to get out of bed and walk.  I get that.  But all I ask for is a little civility and a little gratitude.  Trust me, I don't want to be seeing your obnoxious drunk ass in the trauma bay at 2 AM either or repairing your bladder at midnight, but here we both are.  So let's try our damnedest to make the worst of times into the best of times.
at September 04, 2018 38 comments: