Patients have several rights when they walk into a hospital - the right to be seen and evaluated, the right to receive care regardless of their demographics, and the right to refuse care.  If that last one confuses you, don't feel bad - it confuses me too.  Why would someone come to a hospital and then refuse to be treated?  Why bother coming?  Those are questions I have failed to answer every time.  Regardless, if they say "No thanks," I respect their wishes and walk away.

A very healthy woman in her 70's was dragged to the emergency room by her friend because she had been having abdominal pain for nearly a week.  She had a long history of "stomach problems" since she was a small child, but she had no major health problems and had never had any surgery.  When I examined her, I immediately noticed that her abdomen was markedly distended, and everywhere I pushed hurt.  A lot.  After the examination I excused myself to look at her CT scan, and what I saw gave me pause.  No, actually it made me quite nervous.

Ok, it scared the shit out of me.

Nothing was where it should have been.  Her appendix, normally in the right lower quadrant of the abdomen, was in the right upper quadrant, and her spleen, normally in the upper left, was also in the upper right.  Worse yet, there was a long segment of small intestine which was dilated and thick with fluid around it - a dire sign of bowel that has either died or is about to.  And as you can probably imagine, dead intestine equals dead patient.

I quickly went back to see her, only to see her getting up to get dressed.  I asked where she was going, and she politely but firmly told me that she was going home.  I explained that I believed she had intestinal malrotation with midgut volvulus (try saying that 5 times fast) and needed immediate surgery:

"No thank you.  I'm going home," she told me.  "Maybe I'll come back tomorrow if I still feel sick."

"If you go home tonight, there won't be a tomorrow," I warned her.

I told her she would not live through the night without surgery, and I had already called the operating room to prepare a room for me.  Her friend tried to convince her.  Her sister called her from across the country.  Her nephew called her.  But none of us could change her mind.  Normally if a patient still refuses surgery after I fully explain the severity of the situation, I say "As you wish," and I leave.  I refuse to operate on someone who doesn't want surgery.  But something this night made me continue.  Something made me stay and fight.

A full hour later, she finally agreed.  I rushed her into the operating theatre and found this: 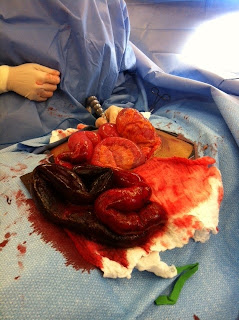 In case you hadn't guessed, that black, dead-looking thing is the 75 cm (30 in) portion of her small intestine that had died.  I removed that segment, put her back together, and 5 days later she walked out of the hospital.  As I was discharging her, I told her with a smile that she was one of the most stubborn patients I had ever had the pleasure of operating on.