At the risk of sound redundantly repetitive, superfluously repetitious, and recurrently mundane, I believe very firmly in the Call Gods.  I know I bring them up a lot, but despite the fact that Mrs. Bastard and I take the Call Gods very seriously, I get the feeling that a lot of my readers don't.


That is a seriously bad move.

I remain deathly afraid of the Call Gods (even more afraid than I am of huntsman spiders), but only because they continue to demonstrate that they are real.  Really real.  And really evil.

A colleague of mine presented our monthly trauma conference recently.  He spoke of a young man who had been involved in a high-speed rollover motor vehicle accident and was obviously in shock when he arrived at our hospital.  My colleague's workup demonstrated a large laceration of the right diaphragm (the muscle that controls breathing, separates the chest from the abdomen, and keeps all the guts in the belly).  The laceration was so large that his entire liver was up in his chest, compressing his lung and preventing him from breathing properly.  My colleague took him to surgery, pulled his liver back down into the abdomen where it belonged, and repaired the diaphragm.  It was an excellent presentation with a great outcome for the patient, and I listened with a mixture of curiosity and fascination. 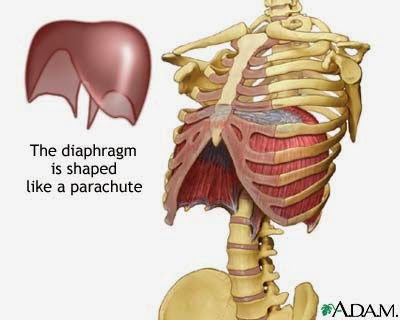 Now I've seen innumerable knives and bullets poke holes in the diaphragm that I've subsequently repaired, but those are always relatively small injuries (either knife- or bullet-sized) that are fairly easily fixed with a stitch or two.  But blunt diaphragmatic injuries like the one my colleague presented are typically much larger (and rarer) and can be very difficult to diagnose and repair.  All during the presentation I kept thinking to myself, "With all the blunt trauma I see, I can't believe I've never seen a blunt traumatic diaphragm injury."

See where this is going yet?  Talking about the Call Gods . . . Yeah, I didn't at the time.

I happened to be on call that same day, and it turned out to be a very light day with only two low-level, minimally-injured fall victims coming in.  So after finishing up writing a blog post, I thought I might tempt the Call Gods and lie down to try to get some sleep that night.

HA!  No.  The Call Gods were watching me carefully, and they obviously decided they would not be allowing anything like that.  Not during their watch.

Just before midnight my lovely pager (which I adore and never want to throw across the room) informed me that a level 1 (high level) motor vehicle crash victim would be arriving in 5 minutes.  Two minutes later as I rushed towards the trauma bay, my lovely pager nearly did get thrown against the wall when it told me a second high-level car accident victim would be coming in another five minutes.

Victim #1, a young man in his 20's who had been driving way too fast (without his seatbelt on, naturally) and had struck a tree, arrived moaning about 4 minutes later, his heart pounding away at 140 beats per minute.  His blood pressure was ok, but his oxygen level was low.  A quick push on his chest revealed air in the soft tissues and a distinctively sickening crunchy feeling, a sure sign that he had rib fractures which had punctured his lung.  We had just enough time to insert a chest tube to re-expand his lung before victim #2 (who happened to be victim #1's passenger) arrived.  He was also in his mid-20's, but he looked much closer to death than his friend.  His heart rate was around 160, but his blood pressure was so low it was nearly undetectable.  His pelvis was obviously severely fractured and was likely bleeding profusely internally, so we put on a pelvic binder and started transfusing him rapidly with blood.  As his blood pressure improved, victim #1 went over to the CT scanner, and as it scanned through his chest the first thing I noticed was his stomach and spleen in his chest.

In case you don't remember your basic human anatomy, the stomach and spleen belong in the abdomen, not in the chest.  This guy obviously had a ruptured diaphragm, a diagnosis I confirmed in the operating theatre a few minutes later.  As expected I found his entire stomach, his lacerated spleen, and portions of his colon and small intestine protruding through a gaping hole in his diaphragm.  I pulled all that stuff out of his chest, fixed the 14cm hole in his diaphragm (yes, that's big), removed his bleeding spleen, and fixed two lacerations in his colon.

I'd like to say that he walked out of the hospital a few days later, but his shattered hip somehow prevented that.  He also had several other potentially-lethal injuries, including a transection of his aorta, which as you can imagine is bad.  Not just bad, but VERY BAD.  It's a particularly nasty injury where the aorta ruptures just past the point where it turns south towards the feet.  Nearly 90% of patients with this injury die before reaching the hospital, and overall 95% don't make it.  Yet he did.

His friend survived too, even though his list of injuries was far longer.  I'll address him in a future post when I fulminate again about seatbelts.

If I ever had any doubt about the Call Gods' existence (not that I ever really did, mind you), this eliminated any shred of uncertainty.  {Redacted} years of practice with not-a-single blunt diaphragm injury until the day I happened to see a presentation on the subject and mention that I had not yet had one . . . it isn't just a coincidence.  It can't be.