A lot of people have written to share their stories with me.  Some have been inspiring, some are funny, some are tragic, and some are just plain sad.  This one falls into the latter category.

Jamie (not her real name) wanted me to share this story because of the senselessness of it, the avoidability.


Hey Doc. Thought I'd share my little brother's story.  Two weeks ago my brother got in a really bad car accident.  He was going down a seemingly straight road at around 110 mph (177 kph).  In the middle of the night.  He was driving while he was really angry after fighting with his girlfriend.  I guess he didn't see a slight turn in the road until it was too late.  He hit his emergency break and tried to drift around the corner.  I'm guessing that was a really stupid move.  He flew off the road sideways into a ditch and rolled his car at least three times.  His car landed about a hundred feet away from where he went into the ditch in some small trees at the edge of a pond.  Here comes the bad part: as I'm sure you guessed, he wasn't wearing his seatbelt.  He got thrown about 30 feet from his car and landed on a pond.  He broke several ribs, his collar bone, his scapula, crushed two vertebrae that were pressing on his spine, and had a collapsed lung.  He is now paralyzed from the waist down and got surgery on his back.  They rebuilt his vertebrae I guess.  He has to get a couple more surgeries.  He is only 22 years old.  He will probably never walk again because he decided to drive like an idiot, unrestrained.  I'm not a doctor, but by the looks of his car, he would have been MUCH better off had he been wearing his seatbelt.  Please share this story.  People need to realize there is a really good reason why we have seatbelt laws.  Twenty two and paralyzed.  No one should ever have to go through that.  Now I know for certain that seatbelts really do save lives.


Sad, right?  Oh just wait, it gets worse.  A few days later, she emailed me with an update:


So the other day we found out what caused my brother's crash.  An EXTREME case of idiocy.  His phone was finally found at his crash site.  He was going through it the other day and he found the reason he lost control in his camera roll.  My idiot brother was taking a picture of his speedometer.  He was going 110 mph.  You can see the two signs he barely avoided hitting in the picture.  He took the picture and looked up last second and saw the turn and tried to pull the emergency break and drift around it.  Thought you might like that little bit of information! 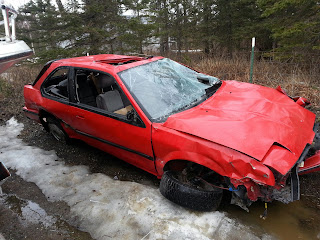 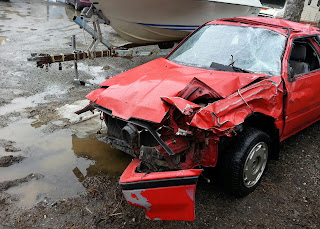 This type of story makes me incredibly sad, and I see it with my own eyes on a regular basis.  For those who don't, it doesn't make it any less sad.  Fortunately he's not dead, but this young man will likely never walk again because of a combination of speed, brash youth, raw emotion, and careless stupidity.  He's lucky to be alive, but his spine injury will be a lifelong reminder of one simple mistake he made when he was young enough to think he was indestructible.

If anyone reading this knows someone (including that person you see in the mirror every day) who doesn't wear a seatbelt, remind them to put it on.
at August 17, 2013