This is the update you've all been anxiously awaiting - the update on last week's near-catastrophic near-career-ending story.  Or maybe you don't really give a fuck and I'm just being overly dramatic again.  In any case, if you missed it I did a Very Stupid Thing and tried to grab a chunk of Japanese maple that was spinning on my lathe at 750 RPM.  Ok, I didn't really try to grab it - it wasn't intentional, I was just trying to prevent the machine from jumping off the table because the log was unbalanced.  Regardless, my hand contacted the spinning log resulting in a deep gouge in my left hand that required three sutures.  Here is the offending log: 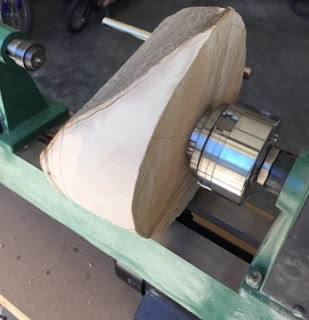 And here is the part of the log that actually hit my hand: 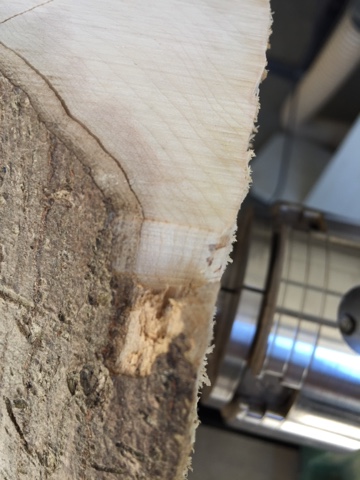 The irregular portion in the middle of the picture is where a rather large chunk of wood tore off and lodged in my hand.  And before you sick bastards say anything, no, there's no goddamned blood on it.  I withdrew my hand fast enough that the blood went on my floor, not the wood.  Fortunately.  I guess.

If you aren't saying "OW OW OW OW" right now, then you haven't been paying attention.

Of course in hindsight I should have bolted the lathe to the table when I first bought the lathe and built the table, but I hadn't intended on turning big rough logs at the time.  And then I changed my mind but didn't change the setup.  This rather (completely) silly (idiotic) manoeuvre led to the nearly-career ending injury about a week and a half ago.  Fortunately it did not actually derail my career.

What, you didn't think I'd let a goddamned log beat me, did you?  As soon as I got home from the hospital I disassembled the lathe table, installed some bolts, and then bolted the damned machine to the damned table like I should have done in the first damned place.  And as I was finishing, the lidocaine wore off.

I stayed out of the shop for a few days after that, not so much to protect my hand but more so Mrs. Bastard wouldn't have to remind me to be careful.  If that makes it sound like she was nagging me, I assure you she wasn't.  I was just being restless and stupid and anxious to return to creating stuff.  But then yesterday I decided that enough was enough - it was time I got back into it.  And when I did, the maple log was staring at me, daring me to work with it again.  So I did.  I put on the appropriate safety gear, grabbed my bowl gouge, and got to work.  And here's what came out of it: 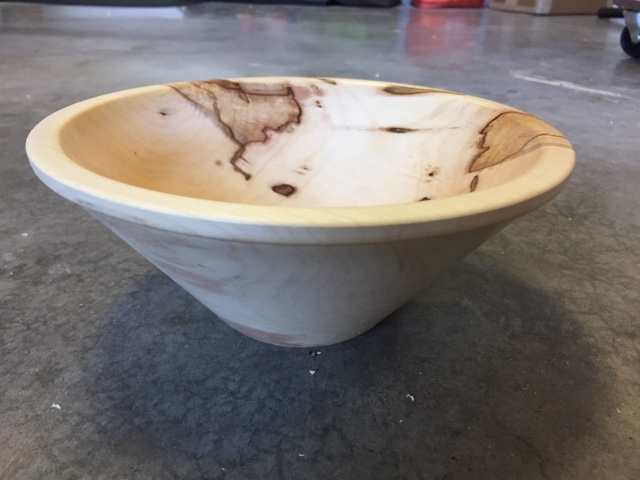