I have a little internal list in my head that I update from time to time whenever it strikes me.  The official title of this list is "My Least Favourite Diagnoses", but my pet name for it is "If I Ever Get This, Please Kill Me".  For your reading displeasure, I've decided to share that list with you fine folks:

For god's sake, please do NOT search for pictures of any of those things.  If you do, I hereby declare and avow that I will NOT be held responsible for any damage done to your computer, phone, tablet, etc from being coated with your own vomit.  And you probably shouldn't click any of those links that I accidentally provided on purpose.

There's one diagnosis that is currently not on the list that has been on there a few times, but it falls off and gets replaced from time to time (at one time it was replaced by Ebola).  I waver back and forth on whether or not this diagnosis qualifies, since it is technically treatable though not curable.  Regardless, even if it doesn't officially qualify for my list at this particular moment, it still qualifies as my least favourite surgical diagnosis for my patients:

There is precious little that can strike fear into the heart of a general surgeon (the good ones, at least).  But hearing the words "bowel obstruction" (or any other surgical catastrophe) in conjunction with "Crohn's disease" and "multiple prior surgeries" can make even the most war-hardened general surgeon soil his scrubs (or at least get really, really nervous).  In case you've never heard of the scourge which is Crohn's disease, it is an autoimmune disorder in which the body attacks its own digestive tract - any portion of it, from the mouth to the anus and anything in between.  This causes severe inflammation, resulting in chronic (often debilitating) abdominal pain, malnutrition, diarrhoea, and ano-rectal abscesses and fistulae (if you don't know what those are, I assure you they are exactly as unpleasant as they sound.  Another link you probably shouldn't click).  It can also cause life-threatening complications including bleeding, obstructions, and bowel perforations.

An experience with my bank teller (I warned you) got me thinking a few days ago.  I was trying to make a simple transaction, no talking necessary, but Mr. Chattypants was having none of that antisocial nonsense.  Somehow he managed to get me to divulge that I'm a surgeon, and he immediately asked the second question that pops into nearly everyone's head.  The first question, of course, is "What's this thing on my leg/face/arm/ass?"  I guess he decided to skip that one out of some sense of dignity and/or social grace, so he went directly to the second question which, regardless of the social situation, is always "What was your most difficult case?"  I've had several readers ask me the same question, so . . .

If you've put 2 and 2 together, you can see where this is going.

While knee-deep in my surgical training, I had the opportunity to treat Xavier (not his real name™), a 50-ish year old gentleman who had been diagnosed with Crohn's disease about 30 years prior.  Since that day (which he eloquently described as "the worst fucking day of my miserable life"), he had been on every medication that researchers much smarter than I had been clever enough to invent, though none had provided any real (or long-lasting) improvement.  His chronic abdominal pain and rectal bleeding finally came to a head about 10 years before when he finally underwent an ileocæcectomy (a surgical procedure to remove the end of the small intestine and beginning of the colon and reconnect the two ends), which looks something like this: 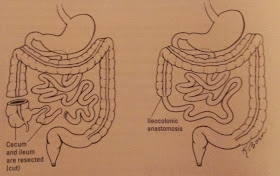 Surgeons know to avoid operating on Crohn's patients unless it is an absolute necessity, and in Xavier's case, it was.  His disease was isolated (at least back then) to the terminal ileum and caecum (the end of the small intestine and beginning of the large intestine), but this area had become so inflamed that it had ruptured.

That was only the beginning of Xavier's problems.

Unfortunately there is no cure for Crohn's disease, and performing this life-saving surgery to remove a perforated segment of intestine did nothing to improve his overall process.  In Xavier's case it saved his life (for the time being) but opened him up to a whole spectrum of new problems.  Literally.  Over the course of the next several years, he was treated with multiple medicines to modulate his immune system, but despite the attempts to prevent further complications, he had further complications. 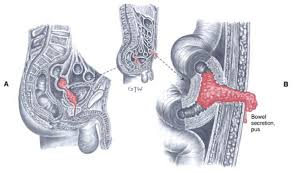 He had increasingly bad flares increasingly more often, and he eventually wound up with an entero-cutaneous fistula, an abnormal connection between the bowel and the skin, and bowel contents leak out.  In an attempt to prevent even more problems (read: death), the fistula was initially treated without surgery.  Unfortunately with each flare it seemed a new fistula popped up.  This non-operative approach predictably failed, and several years and several surgeries later, he was left with an abdomen that looked something like this:
By the time I met him he had an end jejunostomy, several entero-cutaneous fistulae contained within a blind-ended segment of ileum, and a mucus fistula at the proximal end of his remaining descending colon.  If that makes no sense to you, it made only slightly more to me.  Basically his intestine was a jigsaw puzzle with several missing pieces, several misshapen pieces from multiple other puzzles, and three Monopoly tokens, and the three of hearts.  Fortunately it made complete sense to Dr. Anderson (not his real name™), the surgeon responsible for putting Humpty Dumpty back together again.  The goal, he told Xavier, was to take everything apart and put everything back together again.  This was an extraordinarily risky surgery, fraught with potential dangers - leaks, more fistulae, and death.  Despite the risks, Xavier wanted all of his fistulae gone, and he pleaded with us not to create any new ostomies if at all possible.

"Risky" didn't even begin to describe it.

At precisely 7:45 AM, Xavier was put under anesthesia.  Dr. Anderson went over the game plan with me, took a deep breath, and we began.  It took us nearly an hour just to incise the skin from around the intestine.  As the case proceeded, we had to separate the bowel not only from the abdominal wall, but also from itself.  Years of chronic inflammation had caused everything to mat together into a giant clump of solid collagen.  We meticulously dissected his tissue, trying to cause as little trauma as possible, and failing often.  By noon we had finally gotten past the abdominal wall and into the abdominal cavity, and by 5PM we had delineated most of his internal anatomy.

That was the easy part.

The segment of small intestine containing the multiple fistulae had to be removed and the two ends reconnected, leaving a blind-ended segment.  One end of that segment then had to be connected to the small intestine, the other end to the large intestine.  In all we made three new anastomoses (connections between the bowel), any of which had the potential to leak or create new fistulae.  Dr. Anderson and I finished the case just before 10 PM, having taken one restroom break each, and no breaks to eat.

And we still hadn't cured his Crohn's disease.

We had told Xavier prior to surgery that, if he survived, he would have an extremely long recovery in the hospital, and an even longer one at home.  Unfortunately to make a long story short (too late), Xavier did not survive his surgery.  It's difficult to say what actually killed him, but the simplest explanation is that his chronically weakened system wasn't strong enough to endure a 14-hour surgery.  Xavier went into the procedure a broken and defeated man, unable and unwilling to endure his debilitating disease any further.  In his mind, death was preferable to continuing on as he was.  On the night he died, the last thing he told me before I went home for the evening was, "No regrets, Doc."

Which brings me back to my list.  After writing this story and thinking of what Xavier went through, Crohn's disease just made it back on.