Even more things I don't understand

Despite the fact that I've written a handful of complimentary posts about myself, I'm not one to toot my own horn very often.  That said, though I rarely claim to be smarter than anyone, I have to admit that I'm a fairly intelligent guy.  Despite this, I've written about things I don't understand in the past, and it's been quite a while since I have, so I feel it's high time I embiggen the list of things I just can't seem to wrap my mind around.

Of the myriad things I just can't fathom, I think I understand smoking the least.  With all of the health problems that cigarettes cause, I simply can't understand how anyone these days could possibly begin (or continue) smoking.  Now before anyone starts yelling and screaming that nicotine is addictive, I ALREADY KNOW.  I know how easy it is to become addicted to cigarettes, and I know how difficult it is to quit once you're hooked.  But it's a rare soul who doesn't know at least one person who was affected adversely by cigarettes - lung cancer, emphysema, chronic bronchitis, oral cancer, cataracts, heart disease, stroke . . .

And yet, people still smoke.

"GET TO THE POINT, DOC!" I can hear you screaming.

I got a call from an emergency physician some time back for Samuel (not his real name©), a gentleman in his 50s who had a history of severe peripheral arterial disease.  If you've never heard of PAD, it's very similar to coronary artery disease, except that instead of the arteries of the heart getting blocked by gunk and causing a heart attack, it's the arteries in the rest of the body (including the legs, intestine, etc) that become blocked, causing all the tissue downstream to die.  The most common causative agents are smoking, diabetes, hypertension, and high cholesterol, all of which Samuel had or did.

About a month prior to coming to my hospital, Samuel's aorta, that rather-important artery that comes off the heart and supplies blood to the entire body, had become completely blocked at the point where it splits to supply blood to the legs, so a bypass surgery was done at an outside hospital. 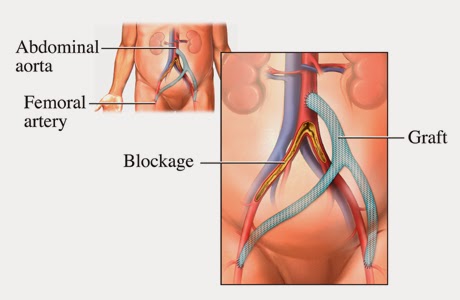 Today Samuel was having severe abdominal pain, so the emergency physician correctly presumed that he was having a complication from that surgery.  He promptly ordered a CT scan of his abdomen which fortunately ruled out any complication of his bypass (such as a leak or infection or blockage of an artery), but it surprisingly showed a small bowel obstruction.  His small intestine was dilated to about 8-times its normal diameter, but more even more ominous was that it looked like the blood supply to a segment of the bowel had twisted on itself, an entity called intestinal volvulus.  Any tissue whose blood supply is twisted will eventually die, so this is a dire surgical emergency.

Thirty minutes later he was in the operating theatre, and 30 minutes after that I had successfully untwisted his intestine, which was perhaps an hour or so from dying.  As you can probably imagine, that's not a good thing.  I watched it for a few minutes, waiting for the colour to normalise (it did), and then I closed him up.  Another life saved!

I went out to the waiting room to find his wife and let her know that everything went well.  As I was chatting with her and letting her know how I expected his recovery to go, a familiar odour reached my nostrils - cigarette smoke.  After I was done, I asked her if she had any questions.  When she said "no", I told her that I had one:

"When are you going to quit smoking?"

Her smile immediately faded, and she looked at her feet.  "We're trying to quit," she almost whispered.

Wait . . . we?  Are you telling me this man who nearly lost his legs a month ago because of his smoking is STILL SMOKING?

With a stern look and not even a hint of mirth, I told her that she and Samuel had to quit.  NOW.  "I don't care if you go cold turkey, use nicotine gum, a nicotine patch, prescription medicine, chewing gum, e-cigarettes, meditation, yoga, hypnosis, acupuncture, or voodoo," I said, trying not to yell.  "Your smoking was making him smoke, and his smoking is killing him, slowly but surely."

I sent Samuel home a week later, repeatedly beating my point into his skull daily.  Unfortunately (though perhaps not surprisingly) he never showed up for his follow-up appointment.

I don't expect perfection, except from myself (though I rarely attain such heights).  But I do expect people to help me help them get better.  Why can't (or won't) so many people do that?