Anyone who's followed this blog for any length of time knows the tragedy that was (and still is) the Jahi McMath case.  For the three of you who have never heard of Ms. McMath, she was a 13-year old girl from California who underwent a complex upper airway procedure (including a UPPP and tonsillectomy) over 2 years ago.  She bled profusely postoperatively and went into a prolonged cardiac arrest, leading to brain death.  A total of six different physicians confirmed the diagnosis, and she was declared dead.  Despite the fact that a death certificate was produced, her mother refused to accept her daughter's death and fought (successfully) to have Jahi transferred to a facility in New Jersey where brain death can be refused on religious grounds.  And there she still remains ("still" having two very distinct, but very appropriate, meanings here).

This time the victim is little Israel Stinson, an adorable 2-year old boy, also (probably not coincidentally) from California.  According to his mother Jonee Fonseca, Israel had a "minor" asthma attack on April 1, so she took him to the Mercy General Hospital, where he was stabilised and transferred to University of California Davis Medical Center.  Unfortunately once he was there, he had another attack and stopped breathing.  He was without oxygen for 40 minutes while they attempted to revive him.  Once the dust settled, he was moved to yet another hospital for further treatment on April 12.

Details are rather scarce, so getting an accurate timeline is somewhat difficult.  It seems that doctors at the third hospital performed some sort of brain death study, and when the results came back as unfavourable (ie brain dead), they apparently notified Jonee of their intention of performing a confirmatory study.  His mother didn't like that idea ("I know what comes next after that, and I’m just not ready to talk about burying my baby," she said) , so she posted this note in his room: 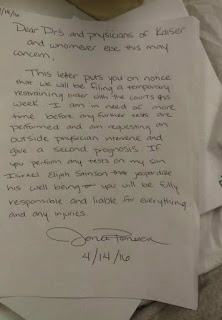 In case you can't read it, it says,

"Dear Dr's (sic) and physicians of Kaiser and whomever else this may concern,

This letter puts you on notice that we will be filing a temporary restraining order with the courts this week.  I am in need of more time before any further tests are performed and am requesting an outside physician intervene and give a second prognosis.  If you perform any tests on my son Israel Elijah Stinson that jeopardize his well being you will be fully responsible and liable for everything and any injuries. - Jonee Fonseca"

The doctors supposedly performed the tests anyway, which confirmed he was brain dead.  The nature of the tests and whether they were done before or after this note was written is unknown.  Regardless, Jonee was informed that because he was dead, the hospital intended to take Israel off life support within a day or two, after the family was given enough time to say their goodbyes.

Jonee did not accept this.

"How would you feel if someone said, ‘Your son is dead, we’re not doing anything for him,'" she said.  She enlisted the assistance of Alexandra Snyder and her Life Legal Defense Foundation (LLDF).  If that name sounds familiar, they are the same group that provided documents that assisted Nailah Winkfield in getting Jahi McMath out of California and transferred to New Jersey.  Jonee and her team of lawyers have successfully stopped the hospital from turning the machines off, though time seems to be running out.  Last week they were given until today to get an outside specialist's opinion, though yesterday that was extended until Monday May 2.

Alexandra Synder had this to say about brain death: "I absolutely believe this is the parent’s choice. It’s not for the state of California, it’s not for the doctors to make this declaration as long as this child’s heart is beating,"  Sound familiar?  It should.  It sounds startlingly similar to something that Jahi's lawyer Chris Dolan said: "It is our position that no doctor determination can end a life without parental consent".

In plain English, these lawyers are claiming that doctors shouldn't be the ones to make a medical diagnosis - parents should.  Jonee said essentially the same thing:


"I don’t feel that its anybody’s right to say just because we’re not getting response from the brain right now, that we have to bury him.  That’s crazy to me."


"Who is a doctor to go against God?"

Out of respect for a dead toddler, I'm trying my best to avoid my usual snark and sarcasm here, so I will leave those statements alone for now.  For now.  NOTE: I will not ask commenters to do the same.

Meanwhile several videos have been released showing Israel twitching in response to being tickled.  The family seems to think this means he isn't brain dead.  It doesn't.

As expected, LLDF is trying their damndest to get Israel transferred to a facility in New Jersey, looking for a doctor and facility to accept and care for him.  As of this writing, they have found neither.  The pro-life vultures are however, continuing to demonstrate that they don't understand what brain death is.  Writing at LiveActionNews.com, self-described "evangelical pro-life attorney" Kristi Burton Brown had this to say about Israel:


"It is unthinkable that a hospital would act so quickly to pull a child off of life support without an adequate opportunity to recover. At Israel’s age, the brain still has much development and growth to work through."

I'm not sure how Ms. Burton Brown could think that a full 4 weeks is inadequate time for one to recover, ignoring the fact that recovery from brain death is physically impossible.  I have to remember though that 1) Kristi is a lawyer, not a doctor, so she most likely doesn't understand, and 2) as an evangelical pro-lifer, she has no interest in understanding.

This is the second brain death dispute case out of California just this month.  The other was a 17-year old boy who led police on a high-speed chase at 3 AM (with alcohol reportedly involved) before crashing into a pole.  He was declared brain dead, his family fought it, but he succumbed to his injuries a few days later.  Despite the circumstances surrounding the crash, his family is, predictably, talking about suing the hospital.

As I predicted waaaaaaaaaaaay back in January of 2014, Jahi's case seems to have set a precedent where family members of brain dead Californians believe they can refute the irreversible diagnosis of brain death and keep their loved ones "alive".  This belief benefits absolutely no one.  NO ONE.

As was (and still is) the case with Jahi, the people who will lose the most here are Israel's parents, in more ways than one.  A beautiful little boy was devastatingly lost, and just like with Jahi, various people are sadly enabling them to prolong their own agony. 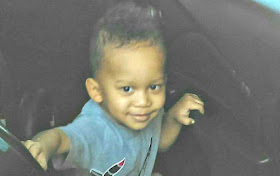