I hate waiting.  I simply can't stand waiting for pretty much anything - lines in the airport, test results, advertisements on TV, everything.  I can't even stand waiting for diseases to get better, and that's exactly why I chose surgery.   Do you have high blood pressure?  Well your doctor can give you a pill that may work...but you won't know for several weeks.  If it doesn't work, he can give you more.  Or less.  Or a different drug.  Or another drug.  Will that work?  JUST WAIT A FEW MORE WEEKS.  On the other hand, do you have gallstones in your gall bladder?  I can take that out.  Colon cancer?  I can cure that!  Perforated stomach ulcer?  I can fix it instantly.  So because it's been 11 days since my last post, I figured my next update should be about waiting.

Appendicitis almost never shows up during the day.  I have no idea why, but it seems no one EVER comes to the ER at 10AM with appendicitis.  Everyone likes to wait until the middle of the night before coming in.  I can't understand how or why they do this, because I've had appendicitis.  And let me tell you, it SUCKS.  It feels like you're being stabbed in the gut with a huge, dull, rusty sword.  And the longer you wait, the higher your risk of the appendix rupturing.  When that happens, it becomes an entirely different disease.  People with mild appendicits usually go home within 24 hours.  People with ruptured appendicitis, however, typically are in the hospital for a week, and some even die.  I only waited about 4 hours before I went to the ER, and my appendix had already nearly ruptured by then.  So how the hell can someone wait a day or even longer before seeking medical attention?  God damn it people, listen to your bodies!  Sorry, sorry.  I digress.

The ER called me a few days ago at 1 AM (of course) to tell me about a 34 year old woman who had just flown back from week vacation on a tropical island.  She had been doubled over in abdominal pain for her entire trip, but she had waited until she got home before coming to the hospital.  Naturally, her CT scan showed ruptured appendicitis.  Greeeeaaat.  After explaining the situation in detail, I took her to the operating theatre where I found this: 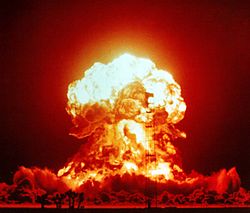 Ok, it really wasn't that, but that's what it looked like had happened inside her.  Her appendix had indeed ruptured, there was pus everywhere, and everything was inflamed and stuck to everything else.  I cleaned up all the pus and I managed to chisel her appendix out of the intense inflammatory response (all done laparoscopically, much to my satisfaction).  After a very difficult case, I went out to the waiting room to talk to her husband and his father, who were waiting anxiously to find out the results.

After I told them what I found, her husband said, "That's about the same thing that happened to me!  Remember, Dad?"

My mouth probably agape, I stared in disbelief as his father recounted how his son, this woman's husband, had also had ruptured appendicitis when he was a kid on a skiing holiday.  He had also waited a week before seeking medical attention because he didn't want to cut the ski trip short.

So even though she had been complaining of pain all week, and even though he had been through the exact same thing, they never went to the hospital.  Granted, most people can't diagnose appendicitis that easily, but MOST of us would go to the damned hospital if we were doubled over in pain FOR A WEEK like she was.  Just like her husband, she spent a week in the hospital before she finally went home.  I saw her in my office a few days ago, and she's doing much better.


They say "Time heals all wounds."  But that doesn't quite apply when it comes to surgery.
at November 28, 2012
Share