If you're in the States, you can rest assured that I am most assuredly NOT writing about the Department of Natural Resources.  Nor am I writing about Denbury Resources, Inc (whose unfortunate symbol on the New York Stock Exchange is DNR).  No, anyone remotely familiar with the medical field (or who ever watched House MD or Holby City or Grey's Anatomy or ER or St Elsewhere or M*A*S*H or Scrubs or Marcus Welby, MD [godDAMMIT there are a lot of medical dramas!]) knows that "DNR" stands for "Do Not Resuscitate".  It represents the primary right of the patient - to refuse medical treatment, even in the face of impending death.  Most usually it is employed by the elderly, severely infirm, or terminally ill to alert their medical care providers that they do not want any heroic measures in the event of sudden or imminent death.

There are various elements to a DNR, including orders not to intubate, not to do chest compressions, not to employ vasopressors (medication to artificially elevate blood pressure), not to give food and/or fluids, not to use dialysis, or to use comfort measures only.  The exact nature of the DNR order, including any and all therapies that may or may not be used, is explicitly elucidated in a signed document that is supposed to be readily available for medical practitioners to see.  That way there can be no ambiguity if an unconscious yet terminal patient is brought to the hospital.  The papers are supposed to be easy to find, though sometimes they can be difficult to track down.

Sometimes, however, the DNR is, well, let's just say sometimes it is slightly more prominent: 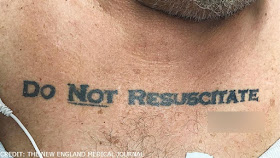 According to a case report from the New England Journal of Medicine, this 70-year old gentleman was brought by paramedics to a hospital in Miami, Florida unconscious and intoxicated.  He had a history of chronic obstructive pulmonary disease, atrial fibrillation, and diabetes, and he arrived without any identification or family members.  When doctors disrobed him to do their examination, they found "DO NOT RESUSCITATE" tattooed quite clearly (with "NOT" even underlined) on his chest with his signature underneath.

If that were an easy question to answer, I wouldn't be writing this right about now, would I.

A few hours later his blood pressure dropped precipitously due to severe sepsis, and he developed a severe metabolic acidosis (his serum pH was 6.81 - I have never seen anyone with a pH less than 6.9 survive).  The intensive care doctors who attended to him had a decision to make: A) honour the tattoo as a legally binding DNR or B) treat him as they would any other anonymous patient.

According to lead author Gregory Holt, MD, the doctors chose to invoke "the principle of not choosing an irreversible path when faced with uncertainty", so they categorically ignored the tattoo, starting him on antibiotics, putting him on BiPAP, and starting vasopressors.  In other words, everything short of intubating him.

My first reaction to this story was "WHAT?  WHAT THE FUCK WERE THEY THINKING?  HIS CHEST SAYS DEE EN ARE!"  My next thought was that if they had done chest compressions, they would have been committing assault on this gentleman.  My next thought was . . . calm the fuck down and get some more information, dumbass.

It turns out cases like this, while extraordinarily rare, are not entirely isolated.  In fact there is a published case report in the literature of a man with a similar "DNR" tattoo (though it is admittedly not quite as explicit) which did not reflect his actual wishes.  That patient had lost a bet while drunk many years before, the loser being required to get a tattoo of "DNR" on his chest.

Indeed it does.  Regardless, Dr. Holt and his team obtained a consultation from their ethics team, who determined that the tattoo most likely did reflect the patient's wishes.  They advised the doctors to honour it as an ordinary paper DNR.  Out of respect for the patient's (hopefully) wishes, an actual DNR order was written.  Fortunately shortly thereafter the gentleman's real out-of-hospital DNR was obtained, and he passed the following morning without incident.

After contemplating this case for some time, I've come to the realisation that it isn't nearly so clear cut as I had originally thought.  If I got a dying trauma patient who had a prominent and unmistakable DNR tattoo, would I really be able to say "Wait, stop, don't do anything.  Look, it says DEE EN ARE right there on his chest!"?  Would that really be the right thing to do without verifying it first?  The part of me that explicitly respects patients' wishes says an very emphatic "Yes", but the entire rest of me (which is admittedly rather small) says "Not so fast".

I believe that treating a patient who does not want to be treated is malpractice.  However, I also believe I would be obligated to verify the DNR prior to withdrawing or withholding care while consulting my own ethics team.  I also also believe doing anything short of this would be malpractice.